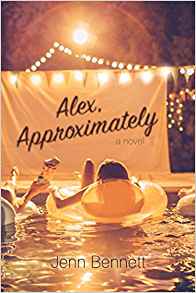 Classic movie buff Bailey “Mink” Rydell has spent months crushing on a witty film geek she only knows online by “Alex.” Two coasts separate the teens until Bailey moves in with her dad, who lives in the same California surfing town as her online crush.

Faced with doubts (what if he’s a creep in real life—or worse?), Bailey doesn’t tell Alex she’s moved to his hometown. Or that she’s landed a job at the local tourist-trap museum. Or that she’s being heckled daily by the irritatingly hot museum security guard, Porter Roth—a.k.a. her new arch-nemesis. But life is whole lot messier than the movies, especially when Bailey discovers that tricky fine line between hate, love, and whatever-it-is she’s starting to feel for Porter.

And as the summer months go by, Bailey must choose whether to cling to a dreamy online fantasy in Alex or take a risk on an imperfect reality with Porter. The choice is both simpler and more complicated than she realizes, because Porter Roth is hiding a secret of his own: Porter is Alex…Approximately. 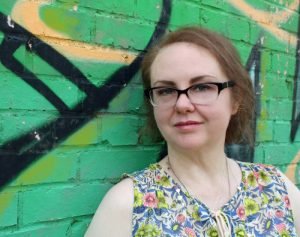 Jenn Bennett is an award-winning author of young adult contemporary romance books, including Alex, Approximately and The Anatomical Shape of a Heart (aka Night Owls in the U.K.). She also writes romance and urban fantasy for adults (the Roaring Twenties and Arcadia Bell series). Her books have earned multiple starred reviews, won the Romance Writers of America’s prestigious RITA® Award, garnered two Reviewers’ Choice awards and a Seal of Excellence from RT Book Reviews, and been included on Publishers Weekly Best Books annual list. She lives near Atlanta with one husband and two dogs.

Review (4.5 Stars): Alex, Approximately was a sweet, romantic story that you will instantly fall in love with.  Bailey moves to the small town of Coronado Cove to live with her father and make a fresh start after a tragic experience.  She has been having an “online” friendship with Alex, who also lives in Coronado Cove, after bonding due to their love of classic movies.  Bailey didn’t tell Alex she was moving near him but hopes that she can find him based on the clues that he gave her during their chats.

Bailey’s dad sets her up with a job at a local museum and that is where she meets Porter.  Porter is the type of guy that drives us crazy.  He is obnoxious, rude and seems to be everywhere that Bailey doesn’t want him to be.  The more time that Bailey spends with Porter at work, she realizes that there is more to him then meets the eye and they both bear the scars of a tragic experience.  I liked Porter because he was someone who was very protective of the people that he cared about and he was someone who was very special, if people took the time to actually get to know him.  I figured out his true identity in the beginning of this story and I was very glad that we got to know Porter just like Bailey did.

I also liked Bailey from the very beginning.  She was shy but sweet and sassy and she was hoping that moving would help break out of her shell.  Over the course of the story she learns that when she takes a chance on life instead of hiding she finds that remarkable things can happen.

Ms. Bennett has been one of my favorite writers for a very long time and I loved Alex, Approximately.  This beautiful romance is well-written and fun and I’m looking forward to reading her next book because I know that it will be amazing.