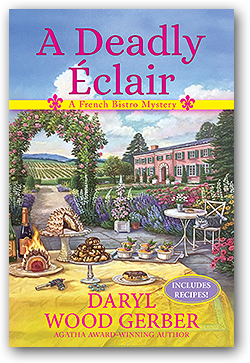 It’s always been Mimi Rousseau’s dream to open her own bistro, but it seems beyond her grasp since she’s been chased back home to Nouvelle Vie in Napa Valley by her late husband’s tremendous debt. That is until her best friend Jorianne James introduces her to entrepreneur Bryan Baker who enjoys investing in promising prospects. Now, with her own bistro and inn, Mimi is throwing the inn’s first wedding ever.

The wedding will be the talk of the town, as famous talk show host Angelica Edmonton, daughter of Bryan’s half-brother, Edison, has chosen the inn as her perfect venue. Anxious, Mimi is sure things are going to turn south, especially when Edison gets drunk and rowdy at the out-of-towners’ dinner, but by the evening, things begin to look up again. That is until the morning rolls around, and Bryan is found dead on the premises with an éclair stuffed in his mouth. And the fingers point at Mimi, whose entire loan is forgiven in Bryan’s will. 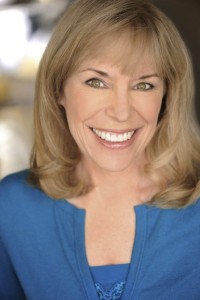 Daryl Wood Gerber is the author of The Cookbook Nook Mysteries, featuring an avid reader, admitted foodie, and owner of a cookbook store in picturesque coastal California. The series debuted in 2013. In addition, under the pen name Avery Aames, Daryl writes the Agatha Award winning, nationally bestselling The Cheese Shop Mysteries set in fictional Providence, Ohio.

Prior to her career as a novelist, Daryl wrote screenplays and created the format for the popular TV sitcom Out of this World. A fun tidbit for mystery buffs, Daryl was also an actress and co-starred on Murder, She Wrote, as well as other TV shows. Daryl is originally from the Bay Area and graduated from Stanford University. She loves to cook, read, golf, swim, and garden. She also likes adventure and has been known to jump out of perfectly good airplanes.

Review of A Deadly Eclair

Review (5 Stars): This is the first book in a brand new series by the talented Daryl Wood Gerber and I think that Mimi and her delicious recipes are an absolute delight.  Mimi has always wanted to start her own bistro and thanks to a wealthy benefactor, Bryan Baker, she is able to make her dreams come true.  The first wedding that she is booked for will be the talk of the town since the bride is a well-known talk show host and everything is riding on impressing the bride and her Hollywood friends.  When Bryan ends up dead with one of Mimi’s eclairs in his mouth, she becomes the prime suspect in his murder and she better find a killer fast before she becomes the next victim on their list.

Such a charming start to this mystery series and I absolutely love culinary mysteries.   The recipes are to die for and I enjoyed meeting this quirky cast of characters.  A Deadly Eclair was a delicious and suspenseful mystery that will have you wanting more and I can’t wait to see what is up next for Mimi in the second installment of this series.