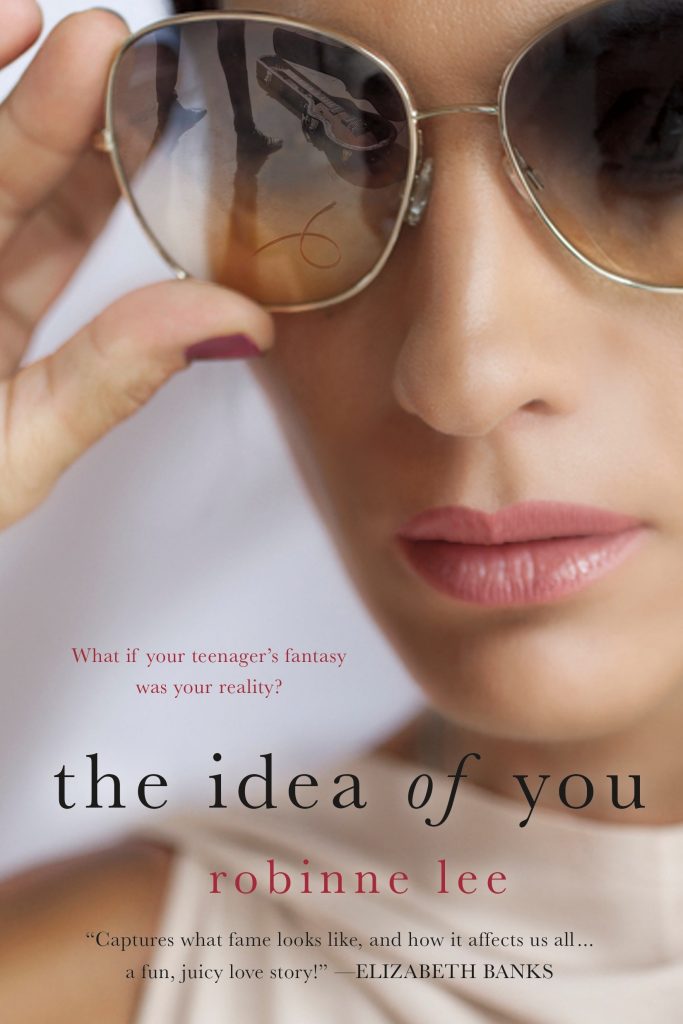 When Solène Marchand, the thirty-nine-year-old owner of a prestigious art gallery in Los Angeles, takes her daughter, Isabelle, to meet her favorite boy band, she does so reluctantly and at her ex-husband’s request. The last thing she expects is to make a connection with one of the members of the world-famous August Moon. But Hayes Campbell is clever, winning, confident, and posh, and the attraction is immediate. That he is all of twenty years old complicates things.

What begins as a series of clandestine trysts quickly evolves into a passionate  and real relationship. It is a journey that spans continents as Solène and Hayes navigate each other’s disparate worlds: from stadium tours to international art fairs to secluded hideaways in Paris and Miami. And for Solène, it is as much a reclaiming of self, as it is a rediscovery of happiness and love. When their romance becomes a viral sensation, and both she and her daughter become the target of rabid fans and an insatiable media, Solène must face how her new status has impacted not only her life, but the lives of those closest to her.

I suppose I could blame it all on Daniel.

Two days before my planned getaway to Ojai, he showed up at the house in a tux with our daughter, Isabelle, in tow. He’d left the car running in the driveway.

“I can’t do the Vegas trip,” he said, thrusting a manila envelope in my hand. “I’m still working on the Fox deal and it’s not going to close anytime soon.”

I must have looked at him in disbelief because he followed that up with:

“I’m sorry. I know I promised the girls, but I can’t. You take them. Or I’ll eat the tickets. What ever.”

An unopened package of Da Vinci Maestro Kolinsky brushes was lying on the entry table, alongside a set of thirty- six Holbein watercolors. I’d spent a fortune at Blick stocking up on materials for my artist retreat. They were, like the trip to Ojai, my gift to myself. Forty- eight hours of art and sleep and wine. And now my ex- husband was standing in my living room in formal black tie and telling me there’d been a change of plans.

“Does she know?” I asked. Isabelle, having retreated immedi- ately to her room—no doubt to get on her phone— had missed the entire exchange.

He shook his head. “I haven’t had time to tell her. I thought I’d wait and see if you could take them first.”

“That’s convenient.” “ Don’t start, okay?” He turned toward the door. “If you can’t do it, have her call me, and I’ll make it up the next time the group’s in town.”

It was so like him to have a Band- Aid for every thing. To walk away from commitments guilt- free. Would that I had acquired that gene.

Isabelle and her two girlfriends had been counting down the days to see the band August Moon, a quintet of handsome lads from Britain who sang pleasant pop songs and drove tween girls mad. Daniel had “won” the tickets at the school silent auction. Paid some formidable amount to fly four to Vegas, stay at the Mandalay Bay, and attend the concert and a meet- and- greet with the band. Canceling now would not go over well.

“I have plans,” I said, following him out into the driveway. He slipped around the back of the BMW and withdrew a cumbersome bag from the trunk. Isabelle’s fencing equipment. “I assumed you would. I’m sorry, Sol.”

He was quiet for a moment, drinking me in: sneakers, leggings, still damp from a five- mile run. And then: “You cut your hair.”

I nodded, my hands rising to my neck, self- conscious. It barely reached my shoulders now. My act of defiance. “It was time for a change.”

He smiled faintly. “ You’re never not beautiful, are you?” Just then the tinted window on the passenger side rolled down and a sylphlike creature leaned out and waved. Eva. My replacement.

She was wearing an emerald-green gown. Her long, honey- colored hair twisted into a chignon. There were diamonds dangling from both ears. It wasn’t enough that she was some youngish, stunning, half- Dutch, half- Chinese star associate at the firm, but that she was now sitting in Daniel’s 7 Series in my driveway looking every bit the princess while I was dripping sweat— now, that stung.

“Fine. I’ll take them.” “Thank you,” he said, handing over the bag. “ You’re the best.” “That’s what all the boys say.” He paused then, screwing up his aristocratic nose. I anticipated a response, but none was forthcoming. Instead he smiled blandly, leaning in to do the awkward divorcé cheek kiss. He was wearing cologne, which he’d never done in all his years with me.

I watched him make his way over to the driver’s side. “Where are you going? All dolled up . . .”

“Fund- raiser,” he said, getting into the car. “Katzenberg’s.” And with that, he pulled away. Leaving me holding the baggage.

I was not a fan of Vegas: loud, fat, dirty. The underbelly of Amer- i ca convened in one garish skid mark in the desert. I’d visited once, years before, to attend a bachelorette party that I was still trying to forget. The smell of strip clubs and drugstore perfume and vomit. Those things linger. But this was not my adventure. This time I was just along for the ride. Isabelle and her friends had made that clear.

They spent that after noon running circles around the resort on a quest to find their idols, while I followed dutifully. I had be- come accustomed to this: my passionate daughter trying any- and every thing, setting her mind and forging her way. Isabelle and her American can-do spirit. There was trapeze school and figure skating, musical theater, fencing . . . She was fearless, and I loved that about her, envied it even. I liked that she took risks, that she did not wait for permission, that she followed her heart. Isabelle was okay with living outside the lines.

I was hoping to convince the girls to visit the Con temporary Arts Center. It would have been nice to squeeze some real culture into the weekend. To imprint something worthwhile upon their im- pressionable minds. I’d spent countless hours trailing my mother through the Museum of Fine Arts in Boston as a child. Following the click of her Vivier heels, the scent of the custom- made fragrance she bought every summer in Grasse. How knowledgeable she was to me then, how womanly. I knew the halls of that museum as well as I knew my third-grade classroom. But Isabelle and her cohorts had balked at the idea.

“Mom, you know at any other time I would say yes. But this trip is different. Please?” she’d implored.

They’d come to Vegas for one reason only, and nothing would thwart their mission. “Our lives begin to night,” Georgia, with the silky brown skin, had proclaimed on the flight in. Rose, the red- head, agreed, and the three quickly adopted it as their mantra. No expectation too high. They had their whole lives ahead of them. They were twelve.

The meet- and- greet was at six o’clock. I don’t know what I was expecting exactly, something slightly elegant, civilized, but no. They crammed us into a fluorescent- lit holding room in the bowels of the arena. Fifty-odd worshippers in various stages of puberty: girls in braces, girls in wheelchairs, girls in heat. Wide-eyed and smitten and on the verge of combustion. 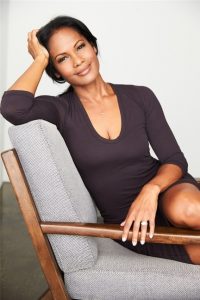 ROBINNE LEE is an actress, writer and producer. A graduate of Yale University and Columbia Law School, Robinne was born and raised in Westchester County, New York. Robinne has numerous acting credits in both television and film, most notably opposite Will Smith in both Hitch and Seven Pounds. She recently completed shooting Fifty Shades Darker and Fifty Shades Freed, playing Ros Bailey. Robinne currently lives in Los Angeles with her husband and two children.

Review of The Idea of You

(Review 4 Stars):  This book had me very intrigued when I read the synopsis because I’m sure it is every woman’s fantasy to have a wild fling with a rock star even though that turned into so much more for Solène and Hayes. Solène Marchand never imagined that she would catch the eye of Hayes Campbell, one of the young members of August Moon, at a Las Vegas concert with her daughter.  The two hit it off and embark on a whirl-wind love affair that will change them both forever.

Solène was such a great heroine and I loved following her on this journey with Hayes.  As a mother, she had put the romantic part of herself away and spent more time focusing on her daughter, Isabelle, as well as her career.  With Hayes, she was able to live and love again, taking risks that she would have never taken if he wasn’t in her life. She was a breath of fresh air for this reader because she was smart, sophisticated and passionate, which made me hope that she would finally get her happy ending with Hayes.  Every choice that she made in this story, she didn’t do on the spur of the moment and by the end of this book, I was in tears.

Hayes was definitely a charmer and I could definitely see why Solène fell for him. His maturity, humor and wit was what convinced Solène to take a chance even though the two had to deal with their share of obstacles over the course of this book. I loved their chemistry together and you could see that they both shared something very special.

The Idea of You was an unforgettable romance that will haunt me for quite some time.  I won’t give any spoilers away but I’m praying that there will be a book two that will continue their love story.  Ms. Lee has done an amazing job with these characters and I can’t wait to see what she does next.