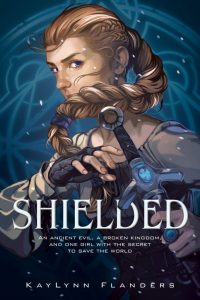 For fans of Sorcery of Thorns and Furyborn comes a thrilling new fantasy about a kingdom ravaged by war, and the princess who might be the key to saving not only those closest to her, but the kingdom itself, if she reveals the very secret that could destroy her.

The kingdom of Hálendi is in trouble. It’s losing the war at its borders, and rumors of a new, deadlier threat on the horizon have surfaced. Princess Jennesara knows her skills on the battlefield would make her an asset and wants to help, but her father has other plans.

As the second-born heir to the throne, Jenna lacks the firstborn’s–her brother’s–magical abilities, so the king promises her hand in marriage to the prince of neighboring Turia in exchange for resources Hálendi needs. Jenna must leave behind everything she has ever known if she is to give her people a chance at peace.

Only, on the journey to reach her betrothed and new home, the royal caravan is ambushed, and Jenna realizes the rumors were wrong–the new threat is worse than anyone imagined. Now Jenna must decide if revealing a dangerous secret is worth the cost before it’s too late–for her and for her entire kingdom.

My skin knit itself back together faster than Hafa could best Lady Isarr.

For the first time, I wished I could send my emotions back through the tethers so my brother and father could feel all my love.

In a real fight, the goal is to end it as soon as possible.

KayLynn Flanders is a graduate of Brigham Young University, with a degree in English Language and a minor in editing. When she’s not writing, she spends her time playing volleyball, reading, and traveling. She lives in Utah with her family, and thinks there’s nothing better than a spur-of-the-moment road trip. Her debut novel is Shielded.

Review (5 Stars): Shielded absolutely took my breath away!  Jenna was a great heroine that was willing to do whatever it takes to protect her family and her kingdom, even if it meant marrying someone she didn’t know to bring extra soldiers to secure the kingdom’s borders.  When she finds out that their threat is more than they bargained for, she must make a choice that could put everyone in jeopardy. I enjoyed watching her journey from princess to warrior and I really didn’t want this book to end.  Definitely a book I would strongly recommend everyone to read.