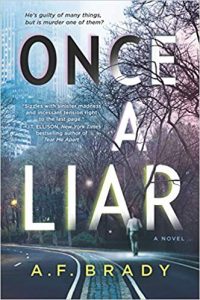 About Once a Liar

In this electrifying psychological thriller, a high-powered sociopath meets his reckoning when he’s accused of the brutal murder of his mistress.

Did he kill Charlie Doyle? And if he didn’t…who did?

Peter Caine, a cutthroat Manhattan defense attorney, worked ruthlessly to become the best at his job. On the surface, he is charming and handsome, but inside he is cold and heartless. He fights without remorse to acquit murderers, pedophiles and rapists.

When Charlie Doyle, the daughter of the Manhattan DA—and Peter’s former lover—is murdered, Peter’s world is quickly sent into a tailspin. He becomes the prime suspect as the DA, a professional enemy of Peter’s, embarks on a witch hunt to avenge his daughter’s death, stopping at nothing to ensure Peter is found guilty of the murder.

In the challenge of his career and his life, Peter races against the clock to prove his innocence. As the evidence mounts against him, he’s forced to begin unraveling his own dark web of lies and confront the sins of his past. But the truth of who killed Charlie Doyle is more twisted and sinister than anyone could have imagined… 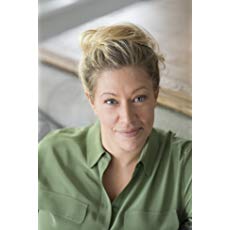 About A. F. Brady

A.F. Brady is a New York State Licensed Mental Health Counselor/Psychotherapist. She holds a Bachelor’s degree in Psychology from Brown University and two Masters degrees in Psychological Counseling from Columbia University. She is a life-long New Yorker, and resides in Manhattan with her husband and their family.

Review of Once a Liar

Review (4 Stars):  I’m still in a tailspin after finishing this story because the writing was fast-paced and the ending will blow you away.  Peter isn’t your typical hero because he lacks empathy for anything or anyone until he is accused of murdering his mistress.  Trying to clear him name, he finds that he has to face the demons of his past to find the true killer and that his actions always have a price.

This book kept me on the edge of my seat because Peter wasn’t a character that most of us could connect.  He was a sociopath with no empathy for anyone and he felt that he could hurt whoever he wanted in life.  This story was very intriguing and it made Peter re-evaluate his past and face the consequences from everything he had done.  Great story.