More Than Just a Pretty Face

For fans of Becky Albertalli and Jenny Han, a sweetly funny YA rom-com debut about falling in love, familial expectations, and being a Renaissance Man.

Danyal Jilani doesn’t lack confidence. He may not be the smartest guy in the room, but he’s funny, gorgeous, and going to make a great chef one day. His father doesn’t approve of his career choice, but that hardly matters. What does matter is the opinion of Danyal’s longtime crush, the perfect-in-all-ways Kaval, and her family, who consider him a less than ideal arranged marriage prospect.

When Danyal gets selected for Renaissance Man–a school-wide academic championship–it’s the perfect opportunity to show everyone he’s smarter than they think. He recruits the brilliant, totally-uninterested-in-him Bisma to help with the competition, but the more time Danyal spends with her…the more he learns from her…the more he cooks for her…the more he realizes that happiness may be staring him right in his pretty face.

“Sure, I got a lot of attention for looking good, but the ability to create something beautiful was so much better because it was something I’d earned, not something that I’d just been given.”

“That was when Kaval Sabsvari, sugar and spice and all things nice, stepped behind the three-point line and drained a jumper that would’ve stunned Steph Curry.” 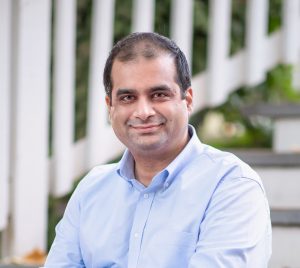 I grew up in Karachi, Pakistan, and currently live in Sacramento, California. There have been plenty of stops in between though. I’m a first generation immigrant, twice over. I’ve been a citizen of three different countries and lived in nine cities.
I am, as Goethe, said, “nothing but a wanderer […] on this earth.”
Living among different people, in different countries at fascinating times in their histories, has shaped both my view of the world and my writing. Ultimately, human beings are the same everywhere (despite the fact that they tell themselves, everywhere, that they are different from each other), and the theme of this fundamental human unity informs everything I write.
As to my life outside of writing, I went to the William and Mary School of Law, and before that attended the University of Toronto, where I studied English Literature. I am currently practicing as an attorney and must “measure out my life in coffee spoons” on a daily basis.
Some members of my family will tell you that I’m also a poet. This isn’t true. I wrote a few poems in Urdu when I was a teenager, and I’ve never heard the end of it…which I wouldn’t mind, honestly, if they were any good. As it is, I’m very happy living in prose, thank you very much.
Other interests include good food, video games, sitcoms, and books of all kinds. Most of my time that doesn’t go to writing or billable hours is consumed by my two children, four and two years of age.

Review of More Than Just A Pretty Face

Review (5 Stars):  I loved this sweet, fun and charming story about finding the best thing for you in life, when you least expect it. Danyal has always been known more for his looks than his intelligence and has dreams of being a chef one day.  Most of his family and classmates see him as the class clown with an over-inflated ego until he is chosen to represent the subject of history for his school’s Renaissance Man competition.  Determined to show everyone that he is more than just a pretty face, he joins forces with Bisma, a intelligent young woman with a troubled past, for the competition and learns that fate puts us on a path that we never could have imagined.

I can’t tell you how much I loved this wonderful romantic comedy and how I felt for what Danyal was going through.  His great love was cooking and he desperately wanted to be a chef even though his family had greater aspirations for him.  They were so concerned about his future that they tried to originally arrange marriage between him and Bisma, but her torrid past put her in the friend zone.  Danyal believed that he was in love with Kaval, the prettiest girl in school, and had dreams that they were destined to be together.  But for Danyal, things didn’t go the way he planned and I enjoyed following him on his hilarious journey to win the Renaissance Man competition.

The other thing I enjoyed about this story was learning a little bit about the Desi culture and the familial expectations that were expected of Danyal.  His family expected him to have the best grades to become a doctor or lawyer and they felt that he was lazy because he dreamed of being a chef. It was all he ever wanted and I loved that he had a special smile when he was cooking his culinary creations.  The descriptions of the amazing food that Danyal created in this book made me hungry at times and I wanted desperately for Danyal to open his own restaurant so we as readers could come visit him.

More Than Just A Pretty Face was a winner for me and I loved spending time with Danyal and Bisma.  This is definitely a book that everyone should pick up this week and I can’t wait to see what Mr. Masood puts out next.