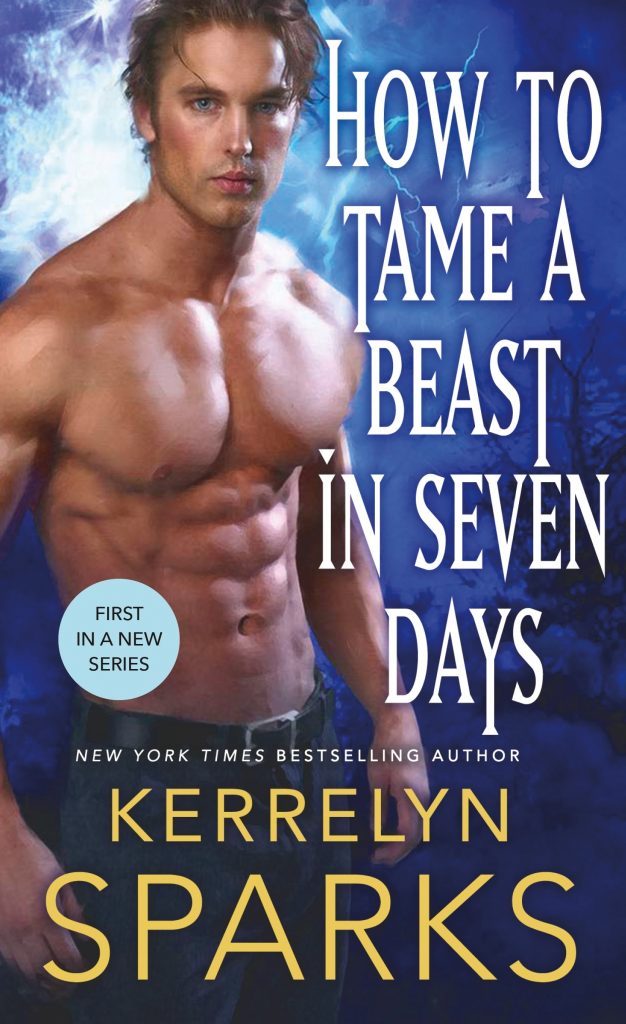 As one of the Embraced—one born with magical powers—the beautiful, innocent Luciana escaped certain death after her father hid her away on the Isle of Moon. Now, nineteen years later, her father has returned with a frightening request. He will be executed unless Luciana returns to the mainland and marries a man feared throughout the land: a terrifying brute known as the Beast.

Luciana accepts her fate and agrees to wed the Beast—Lord Leo—in order to save her father. Soon she learns that her betrothed is also one of the Embraced. With the ability to wield lightning, Leo’s immense power strikes fear into the hearts of men. . .and his mere touch can put an end to a woman’s life. But Luciana cannot deny the passion that burns between them. How can she resist the man who scorches her soul and makes her feel intoxicated with desire—even if surrendering to him could destroy them both?

Apparently, she has issues with reality. After writing 16 books about vampires and shifters, Kerrelyn has now completely gone off the deep end and wound up on another planet.

Although Kerrelyn is best known (so far) for the Love at Stake series, which has hit as high as number 5 on the New York Times list and 22 on the USA Today list, she hopes her readers will love The Embraced as much as they did her merry band of vamps and shifters.

Kerrelyn lives with her family in the Greater Houston area of Texas. You can visit with her on Goodreads or her Facebook page, where she does a monthly contest. On Twitter, she posts as @KerrelynSparks.

Visit her online at www.kerrelynsparks.com.

Review of How To Tame A Beast In Seven Days

Review (5 Stars): Every time I read a book from Kerrelyn Sparks, I know that I’m in for a paranormal romance that is filled with the right amount of love, humor and characters that you will never forget.  How To Tame A Beast in Seven Days is the first book in The Embraced series and I fell instantly in love with Luciana and Leo’s story.  Luciana is one of the Embraced, someone that has supernatural powers and has been sent to live with others on the Isle of Moon.  Luciana is surprised when her father comes for her years later after the death of her twin sister and has a proposition for her.  She is to take her deceased sister’s place and marry the man known as the Beast or her father will be executed. By agreeing to this plan, Luciana never imagined that the man that everyone fears is the man that she has been dreaming about and is her destiny.

This was a great book for me because I connected with Luciana immediately and understood that she would do whatever it takes to protect her family even if it meant marrying someone that she had never met.  She was sweet, charming and your heart definitely went out to her as tried to learn more about the family that had left her on the Isle of Moon as a child.  She and Leo were perfect for one another because they had been through so much and they understood what it felt like to be different as someone who was Embraced. These two characters had amazing chemistry in this story and you could feel the attraction every time that they were together.

This is the first book in the new Embraced series and I’m definitely hooked!  Ms. Sparks is an amazing writer that always has the ability to bring these characters and their magical world to life, which I know will keep readers coming back for more.  I loved Luciana and Leo’s story and I can’t wait to see what will happen next in So I Married A Sorcerer that will be out later this year.