Death by Committee (An Abby McCree Mystery)
by Alexis Morgan

Looking for Inspiration in All the Strange Places

As a writer, the question that I am most often asked is where do I get the ideas for my stories. I have to admit that it’s not always easy to come up with a good answer. The truth is that the source of my inspiration can vary greatly from one book to the next. I think the best answer that is a book is like a patchwork quilt made up of pieces of different fabrics that somehow all come together to make a coherent whole.

I’ve had an entire story pop into my head after listening to a song. On another occasion, I became fascinated with a secondary character in a movie. I couldn’t help but wonder what was going on in his head as he stood, stoic and handsome, waiting for a battle to begin. Why would he choose to risk death defending a group of people who were not his own?

Nonfiction books have also sparked ideas for me. One small detail gets stuck in my head, and the story spins out from there. For example, I read a book about women warriors from the past. Archeologists had excavated the grave of one woman who had been buried with weapons and some beautiful jewelry. The question that I kept pondering was if a man had given her that jewelry, how would he feel about her grave being disturbed and his gifts being put on display in a museum? I wrote a three book series about a thousand-year-old Viking who loved that woman still and stole back her necklace.

Then there was a true story about young boys standing outside of a gambling hall during the Gold Rush every morning because the owner would throw handfuls of coins out into the dusty street. That image was so vivid to me, and I kept asking myself what kind of men would those boys grow up to be. Eventually a character stepped out of the shadows in my mind to tell me his story. He was a gambler who staked his entire fortune on the turn of a card.

One of the odder inspirations in my career led to a major scene in DEATH BY COMMITTEE, my first ever cozy mystery. Seriously, I would have never expected to have a major “Aha moment!” while looking at goats. More specifically, a flock of rent-a-goats.

While that might not be a thing in other parts of the country, it is where I live here in the Pacific Northwest. You can rent goats to clear out overgrown bushes and grass. About a year ago, I was driving through my own neighborhood and passed an empty lot where someone had put up temporary fencing and turned a flock of goats loose inside to chow down on a bunch of blackberry brambles. I’ve always been fond of goats, so I pulled over to the side and watched the hardworking ruminants for a while.

I filed that image away in my mind for future use. It wasn’t long after that when I started plotting DEATH BY COMMITTEE. I’d never written a cozy mystery before and was feeling a little unsure of the process. There was one thing I knew right from the very beginning, long before I knew the identity of the murder victim or even “whodunit.” Yep, you guessed it—a flock of rent-a-goats. I love that whole scene!
So while I can’t say for sure where other writers find their inspiration, I can honestly say that there’s just no telling where I’ll find mine. 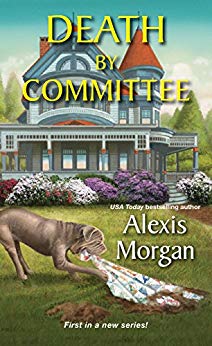 When Abby McCree suddenly inherits her favorite relative’s property in small town Snowberry Creek, Washington, she soon realizes that the ramshackle home comes with strings attached—one of which is tied to a dead body!

After a rough divorce, Abby McCree only wants to stitch up her life and move on. But other loose ends appear after her elderly Aunt Sybil passes away, leaving Abby to tend to a rundown estate, complete with a slobbery Mastiff of questionable pedigree and a sexy tenant who growls more than the dog. As Abby gets drawn into a tight-knit quilting guild, she makes a twisted discovery—Aunt Sybil’s only known rival is buried in her backyard!

Despite what local detectives say, Abby refuses to accept that her beloved aunt had anything to do with the murder. While navigating a busy social calendar and rediscovering the art of quilting, she launches an investigation of her own to clear Aunt Sybil’s name and catch the true culprit. The incriminating clues roll in, yet Abby can’t help but wonder—can she survive her new responsibilities in Snowberry Creek and still manage to patch together a killer’s deadly pattern without becoming the next victim? 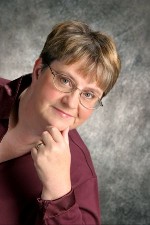 USA Today Best-selling author Alexis Morgan has always loved reading and now spends her days imagining worlds filled with strong alpha heroes and gutsy heroines. She is the author of over forty-five novels, novellas, and short stories that span a variety of genres: American West historicals (as Pat Pritchard); paranormal and fantasy romances; and contemporary romances. She is excited to say that next year will also see the release of her first cozy mystery series. Alexis has been nominated for several industry awards, including the RITA, the top award in the romance genre.

Review of Death by Committee

Review (4 Stars): Death by Committee was a charming debut and I absolutely adored Abby and her trusty sidekick, Zeke.  This story was deliciously entertaining with snappy dialogue and a murder mystery that would make anyone question how well they really knew someone.  The secondary characters added so much to this story and I loved having the sexy neighbor as a potential love interest for Abby. I think that this is a great start to a new series and I’m looking forward to seeing what happens in the next installment of the series.

February 7 – Escape With Dollycas Into A Good Book – REVIEW

One Response to “Blog Tour & Review: Death by Committee by Alexis Morgan”