Jackson Sullivan III has always lived up to his uncle’s expectations, until his career is sidelined, leaving him lost and in need of a retreat to his family’s cabin. But his solitude is interrupted by a beautiful visitor whose combative feelings about the Sullivans lead Jax to a surprising declaration: he pretends to be someone else.

Though she hasn’t seen the privileged scion since she was a child, Kendall Watkins hates everything Jackson Sullivan represents. She should know: her parents have managed the Sullivan estate for years. In need of her own peace and quiet, she heads to the cabin, never expecting to come face to face with the most handsome man she’s ever met. Soon stranded by a violent nor’easter, Jax and Kendall end up sharing more than they dreamed. But Jax knows that when the storm clears, his true identity will be revealed, and Kendall will be left with a betrayal that may be too great to forgive… 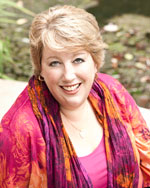 Robin Kaye was born in Brooklyn, New York, and grew up in the shadow of the Brooklyn Bridge next door to her Sicilian grandparents.

Living with an extended family that’s a cross between Gilligan’s Island and The Sopranos, minus the desert isle and illegal activities, explains both her comedic timing and the cast of quirky characters in her books.

She’s lived in half a dozen states from Idaho to Florida, but the romance of Brooklyn has never left her heart.

She currently resides in Maryland with her husband, three children, two dogs, and a three-legged cat with attitude.

Review of Home To You

Review (4 Stars): Kendall came home to Harmony to pick up the pieces of her life after her fiance’ dumped her and she lost her job all on the same day. To make matters worse, she crashes her vehicle in a snowbank and is stranded until she meets Jack.  Jack is renting one of her parent’s cabins in exchange for him doing some much needed repairs and he didn’t plan on having any company during his stay.

What Kendall doesn’t know is that Jack is Jackson Sullivan, the one man who Kendall has grown up to despise.  Jack is hiding out trying to recuperate from a skiing accident that has affected his life and career and is afraid that if Kendall finds out the truth she will hate him forever.  The two find that they have more in common than they ever imagined and Jack shows Kendall what it is like to be truly loved by another person.  Hopefully, she will forgive him once she discovers his true identity.

I like Kendall and Jack together as a couple because she was able to show Jack what he had been missing most of his life.  He was so focused on his career and providing for others that he forgot what he needed and Kendall showed him how to live again.  I felt so horrible for Kendall in the beginning because she lost her job, her boyfriend and her apartment all in one day.  But things happen for a reason and these events brought her to Jack and gave her what she always wanted, a place to call home.

Home To You is the first book in a brand new series by Ms. Kaye and I’m looking forward to reading the rest of the series.  These characters are likeable and fun and the chemistry between Jack and Kendall made me smile.  I can’t wait to spend more time in the wonderful community of Harmony and find out who gets their happy ending next.

I’m excited to give away a copy of Home To You. This giveaway is for US Residents only.  To be entered in the drawing by June 10th, please leave me a comment below: