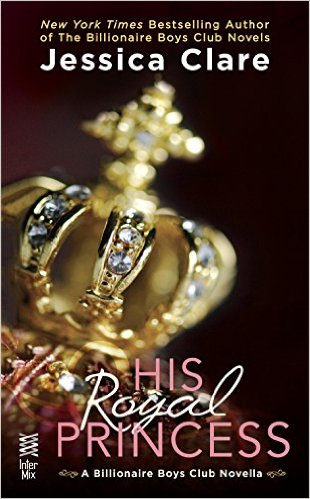 Their romance led to a royal wedding in Once Upon a Billionaire. Now see how it all began for Princess Alexandra of Bellissime and American actor Luke Houston in this novella from New York Times bestselling author Jessica Clare.

As heir to the throne of Bellissime, Princess Alexandra is supposed to be cool and calm…not crushing on a movie star. When she hears that Luke Houston is filming a scene for his next movie in her tiny country, however, she can’t resist sneaking onto set to get a glimpse of the Hollywood hunk.

When Alex is almost caught on set by the press, she ducks into the first available hiding place—only to find herself in Luke’s private trailer, and getting much more than just a glimpse of him. It’s an up close and personal encounter that sets her heart aflutter, and sets her mind on some very unladylike plans to get to know him better…

Review of His Royal Princess

Review (4.5 Stars):  I fell in love with His Royal Princess and I know you will too!!!  Princess Alexandra has a horrible crush on American actor, Luke Huston, and took a chance by sneaking on the set of his new movie.  What she never expected was to come face to face with her crush and sparks fly between these two strangers.  Now, Luke and Alex need to see where they feelings may lead them and it looks as though they are both headed for a happy Hollywood ending.

I adored Luke and Alex together.  They both came from very different worlds and they just fit perfectly together.  I loved learning all about Alex’s world as a princess and the different things that were required of her for her station.  His Royal Princess was a fun, sweet and very charming romance and I’m so glad that these two found their way to one another.