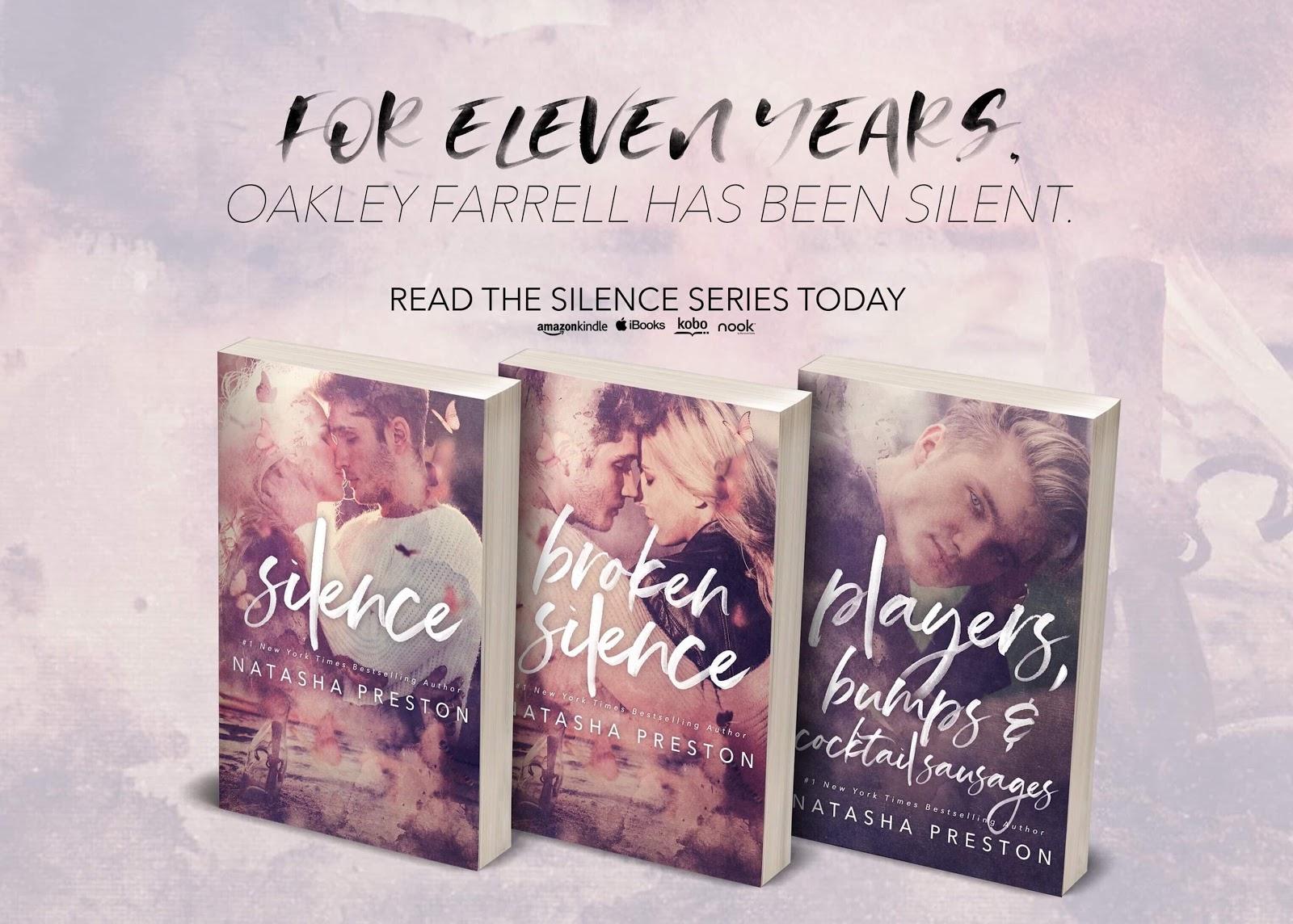 ✰✯✰✰✯✰Silence Series Blog Tour!✰✯✰✰✯✰
Natasha Preston’s much loved Silence Series now has all new gorgeous covers! Check them out below. The first book ‘Silence’ is FREE and the second book ‘Broken Silence’ is on SALE for 0.99!
Covers by Hart & Bailey Design Co
✰✯Silence✯✰ 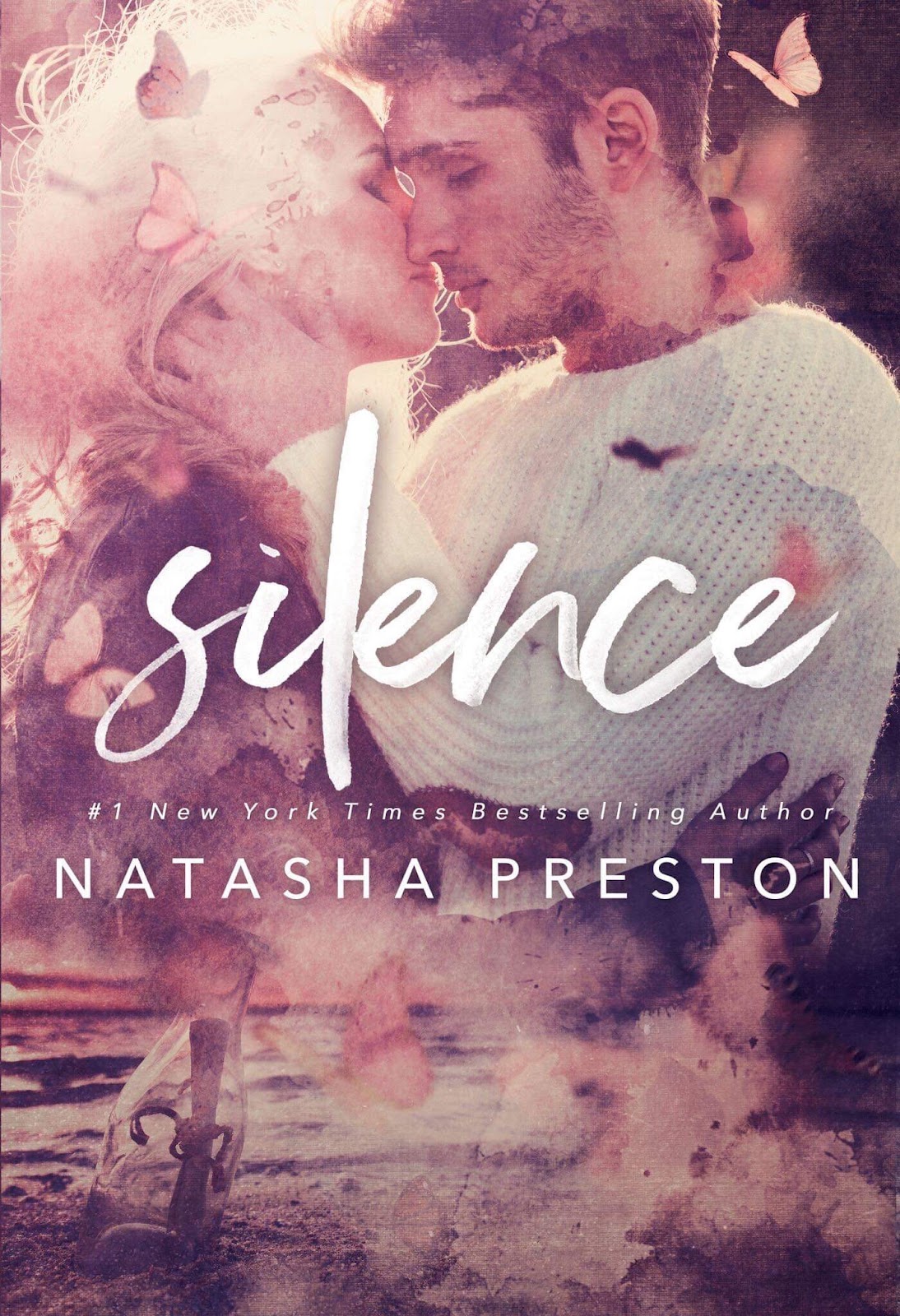 Eleven years Oakley has been silent, hiding a truth that could rip her world apart.
Refusing to communicate beyond a few physical actions, Oakley remains in her own world. Cole is her only friend, he fights for her, protects her, but as they grow even closer together, their relationship gets put to the test.
When Oakley is forced to face someone from her past, can she hold her secret in any longer?
Silence is FREE on all platforms
Amazon – https://goo.gl/D1fScX
iBooks – https://goo.gl/jG5Lbv
Nook – https://goo.gl/uK6KEx
Goodreads – https://goo.gl/cCaKfV
Silence excerpt
I kissed the tip of her nose and hugged her tighter. “I still don’t know how you managed not to talk to anyone. I never understood why you didn’t ever text me back.”
“I didn’t want anyone to get hurt. If I kept quiet, everything would be fine. If I started texting, you would have asked why I didn’t speak, wouldn’t you have?”
I nodded. I would have. Of course.
“And I did reply back every night. I just didn’t send any of them.” She reached across me and grabbed her phone from the bedside table.
I took the phone and looked at what she was showing me. There was a huge list of text messages in her Outbox, all to me. I looked up at her in shock. She’d replied every night even though she could never send them. Flicking through the newest ones, I saw her declarations of love and her telling me how happy she was.
“I love you, Cole. I have for a long time.”
Closing my eyes, I smiled. I never thought I would get to hear her say that.
“I love you, too,” I replied, pressing my lips to hers.
✰✯Broken Silence✯✰ 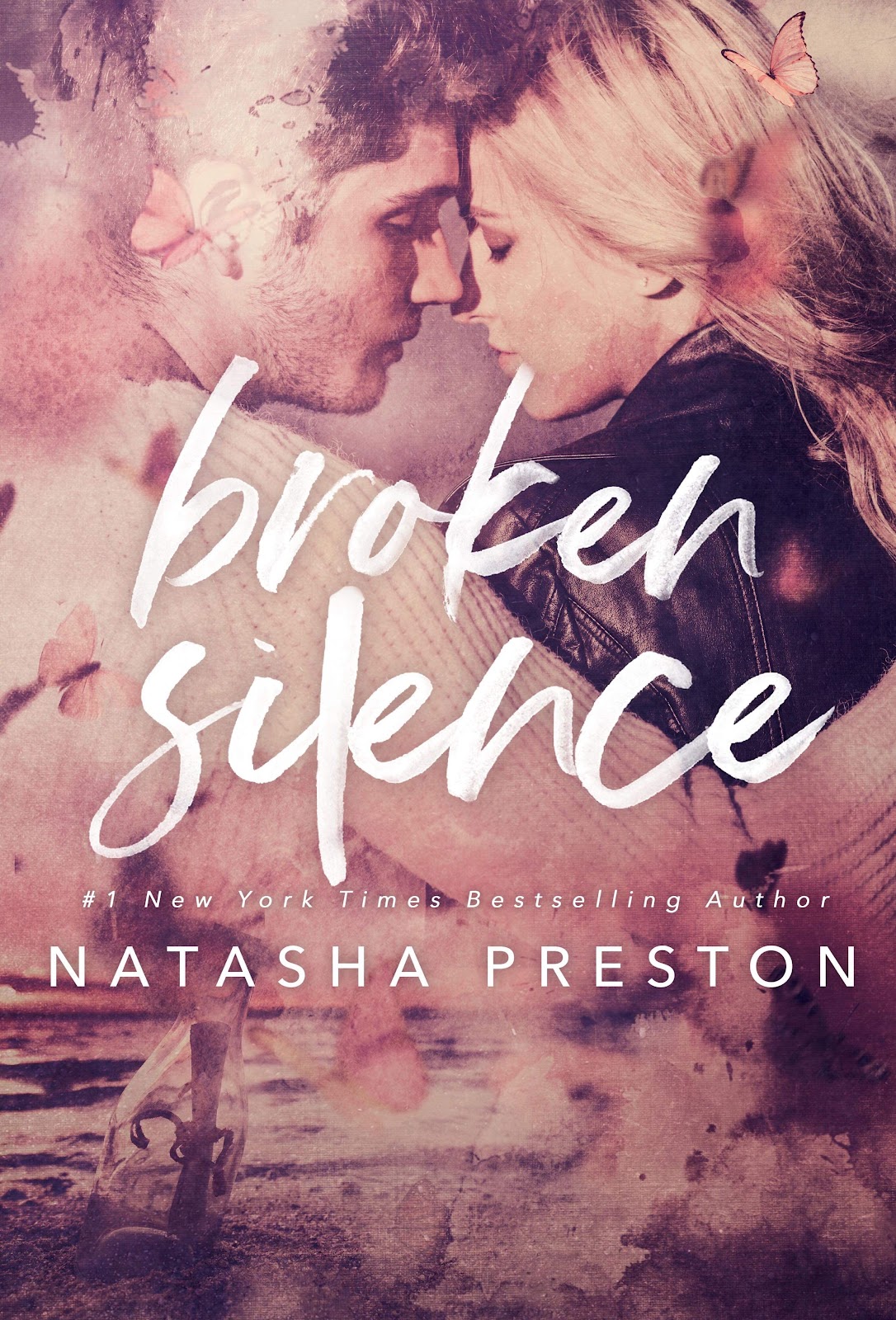 Four years after Oakley left England, she has to come home, forcing her to face the man she left behind.
With the trial looming, Oakley faces her biggest battle yet. Is she strong enough to find her voice and fight for the justice she’s desperate for?
Her love for Cole never faded, but she’s not sure he’ll be able to forgive her for leaving.
On SALE for 0.99!
Amazon universal – https://goo.gl/iaaiDL
iBooks – https://goo.gl/oEcjQ1
Nook – https://goo.gl/1oTVQN
Goodreads – https://goo.gl/Mu1jvc
Broken Silence Excerpt
I nodded, chewing on my bottom lip. “Please just say whatever is on your mind, Cole.”
“I honestly don’t know where to start.” He lowered his head, looking hurt.
It made my heart ache. I was responsible for that look.
“You made the wrong decision,” he said.
I tried to force down the lump rising in my throat. “I did what I thought was the best thing for you. I didn’t want you to have to give up everything.”
He scoffed and shook his head. “But that’s exactly what you made me do. For fuck’s sake, Oakley! How many times did I tell you how much you mean to me? How much I love you? How you are everything to me? I don’t get how you came to the conclusion that I would be better off without you!”
Present tense. He said everything in the present tense. Does that mean he still feels that way?
“I’m sorry. I thought you’d be fine and that you’d get over us and go to the university you’d always wanted to go to. I thought you’d find someone else and be happy.” As much as him being with someone else would hurt me, if he were happy, I could deal with it.
“Well, I didn’t. I’m not fine. I’m not over you. There’s no one else, and I’m not happy. I haven’t been properly happy in four years…but thank you for letting me go to university,” he said sarcastically.
The snippy tone in his voice broke my heart. I had never heard Cole sound like that before. I didn’t blame him, but I hated it.
I found it harder to breathe as I replayed his words in my head even though I was hurt at how he had said it. There was no one else, and he wasn’t happy. I opened my mouth to say something but couldn’t find the words.
“I guess it doesn’t matter to you though. You’ve got your perfect little life halfway around the damn world.”
That snapped me out of it. Australia was pretty perfect to me, but my life sure as hell wasn’t.
“You think I have a perfect life? You think I don’t feel the same way? God, Cole! There’s not been one second that I haven’t thought about you. Every single thing reminds me of you or something we’ve done. Every morning, when I wake up, I still expect you to be there, and every morning you’re not, it breaks my heart.”
“You did it, Oakley! You. I wanted to come.”
“I couldn’t have asked you to move to the other side of the world.”
“I would’ve moved to the fucking moon!” he shouted.
✰✯Players, Bumps and Cocktail Sausages✯✰ 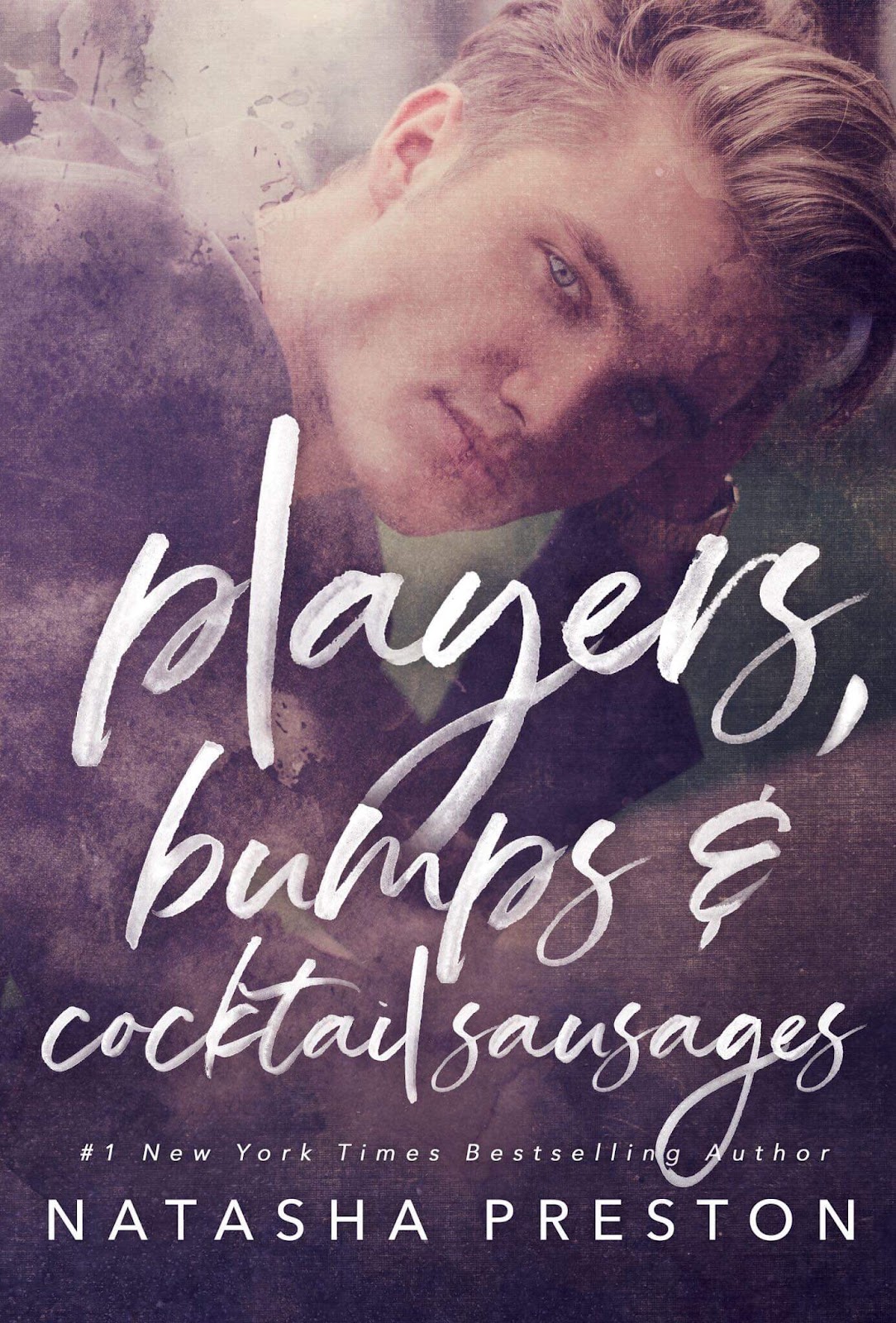 Ex-playboy, Jasper, has hung up his little black book and is strictly a one-woman man.
Jasper is shocked when his new wife, Abby, no longer wants the family they’ve planned. She begins to work late and withdraw from their marriage, leaving Jasper questioning his decision to give her a second chance.
Holly starts working for Jasper, and as the two grow closer, he takes action, sparking a chain of events that makes his once well planned out life spiral out of control.
To get what he wants, he first has to lose everything.
Amazon universal – https://goo.gl/jeaWkH
iBooks – https://goo.gl/maz7at
Nook – https://goo.gl/xnWt84
Goodreads – https://goo.gl/Cb8WPg
Players, Bumps and Cocktail Sausages Excerpt
Finally, she sighed. “You’re right. I’ve always been Good Girl Holly, getting high grades and coming home on time. I’ve never done anything impulsive. I’ve slept with two people, both of whom I was in a relationship with. Albeit, it was a short one with Harry, but I’d thought we were going somewhere. I’m boring, aren’t I?”
Oh, dear God, what have I done?
“You’re not boring, Holly. There’s nothing wrong with not sleeping around!”
She waved her hand at me. “You think there is.”
“When did I say that? Why do women make something else out of what is said?”
“What do you think when you look at me?”
Now, that is a dangerous question.
“I see a woman who has no idea how sexy she really is. You hide behind dark clothes and long jumpers. You put on a lot of that eyeliner stuff to distract people from who you are.”
She gulped. “And what if I don’t know who I am?”
“I think you do, but you don’t have the confidence to be it.”
I’d had more than enough alcohol to tell me that hitting on a mate’s sister was a good idea. In the morning I’d know better. “You’re beautiful and smart and funny, and a handful of guys in here would love to chat you up right now—you know, if you didn’t look a bit scary while drinking alone, like you’re plotting revenge on your ex.”
“Huh?”
“Trust me, when you down shots like that and scowl at nothing, you look like a woman scorned.”
She pushed an empty shot glass away and blushed. “Oh.”
“Hey, don’t worry about it. I happen to think the scorned look is hot.”
“Of course you do,” she muttered dryly. “But thank you for what you said. It was sweet. Sort of.”
I meant it. There was something about Holly that drew me in. Her adult innocence was refreshing and a big turn-on.
She hopped down off her stool and stood between my legs.
“What are you doing?” I asked, stunned.
Her eyes widened, and she shook her head. “Nothing. I need the toilet.” Ducking around me, she hightailed it to the restroom.
What is that? Does she want me as much as I want her right now?
“Can I get you something?” the bartender asked.
“Two shots of tequila, a beer, and a”—I picked up Holly’s empty glass and smelled it—“vodka and lemonade, please.”
He nodded. “Coming up.”
Holly got back to the bar just as I paid. Her cheeks were the same pink as when she’d left.
“Do a shot with me, and then we’ll have a drink. Then, I’m taking you back to my flat.”
Her eyebrows shot up in surprise. “Excuse me?”
ABOUT THE AUTHOR:
UK native Natasha Preston grew up in small villages and towns. She discovered her love of writing when she stumbled across an amateur writing site and uploaded her first story and hasn’t looked back since.
Natasha is the Author of…
THE SILENCE SERIES
Silence
Broken Silence
Players, Bumps and Cocktail Sausages
Silent Night
THE CHANCE SERIES
Second Chance
Our Chance
STAND-ALONES
Save Me
With the Band
Reliving Fate
Lie To Me
After The End
YOUNG ADULT THRILLERS
The Cellar
Awake
The Cabin
You Will Be Mine
The Lost
Visit her website here: http://www.natashapreston.com/
Facebook: https://www.facebook.com/authornatashapreston/
Follow on Amazon: http://amzn.to/2rStVfG
Join her Reader Group: https://www.facebook.com/groups/1801908860088300/
Subscribe to her newsletter: http://www.natashapreston.com/contact