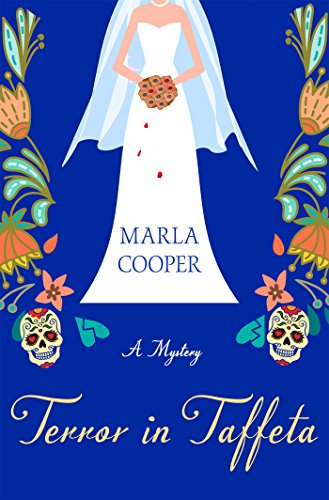 Kelsey McKenna has planned out every last detail of her client’s destination wedding in San Miguel de Allende. But what she didn’t plan on was one of the bridesmaids dropping dead in the middle of the ceremony.

When the bride’s sister is arrested for murder, the mother of the bride demands that Kelsey fix the matter at once. Although Kelsey is pretty sure investigating a murder isn’t in her contract, crossing the well connected Mrs. Abernathy could be a career-killer. Before she can leave Mexico and get back to planning weddings, Kelsey will have to deal with stubborn detectives, another dead body, late-night death threats—and guests who didn’t even RSVP.

Review of Terror In Taffeta

Review (4.5 Stars): I absolutely loved Terror In Taffeta and couldn’t get enough of the heroine, Kelsey!!!  Kelsey is a wedding planner who has carefully planned every last detail of her client’s wedding in San Miguel de Allende.  Except she never planned to have someone die during the middle of the wedding ceremony.  To make matters worse, Kelsey and the rest of the wedding party aren’t allowed to leave the city and it is up to Kelsey to help find a killer so she can get back to her normal life.  The problem is that someone doesn’t want the killer to be found and will do anything to stop her, even if it means adding her to the victim list.

Terror In Taffeta was an entertaining thrill-ride filled with humor, suspense and the worst mother of the bride I’ve ever seen.  Kelsey was a great heroine that was smart, spunky and always seemed to have an answer for everything even when she didn’t.  I got lost in this mystery and I hated to see this story come to an end.  Ms. Cooper has an absolute winner on her hands and I can’t wait to get my little hands on book number two, which will take place in Wine Country.

One Response to “Blog Tour & Review: Terror in Taffeta by Marla Cooper”