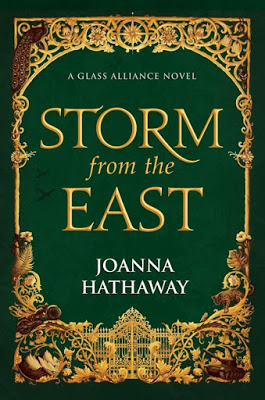 Storm from the East (Glass Alliance #2)

Synopsis:
Battles, revolution, and romance collide in Joanna Hathaway’s stunning, World Wars-inspired sequel to Dark of the West
Part war drama, part romance, Storm from the East is the second novel in Joanna Hathaway’s immersive, upmarket YA fantasy series that will appeal to readers of Sabaa Tahir, Marie Rutkoski, and Evelyn Skye.
War has begun, and the days of Athan’s and Aurelia’s secret, summer romance feel a world away. Led by Athan’s father, the revolutionary Safire have launched a secret assault upon the last royal kingdom in the South, hoping to depose the king and seize a powerful foothold on the continent. Athan proves a star pilot among their ranks, struggling to justify the violence his family has unleashed as he fights his way to the capital—where, unbeknownst to him, Aurelia has lived since the war’s onset. Determined to save the kingdom Athan has been ordered to destroy, she partners with a local journalist to inflame anti-Safire sentiment, all while learning this conflict might be far darker and more complex than she ever imagined.
When the two reunite at last, Athan longing to shake the nightmare of combat and Aurelia reeling from the discovery of a long-buried family truth come to light, they’ll find the shadow of war stretches well beyond the battlefield. Each of them longs to rekindle the love they once shared . . . but each has a secret they’re desperate to hide. 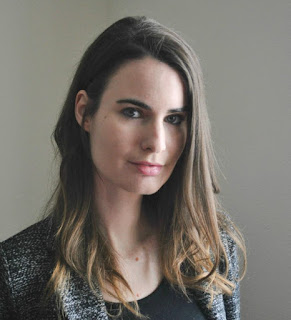 JOANNA HATHAWAY was born in Montréal and is an avid storyteller who was inspired to write after reading her great-grandfather’s memoirs of the First World War. A lifelong history buff, she now has shelves filled with biographies and historical accounts, and perhaps one too many books about pilots. She can often be found reading, traveling, or riding horses.
Her debut novel DARK OF THE WEST is the first in a World Wars-infused fantasy series of forbidden love and deadly revenge. STORM FROM THE EAST will hit shelves on February 11, 2020.

Review of Storm From The East

Review ( 4.5 Stars):  I really enjoyed the first book, Dark of the West, and I wasn’t disappointed with this entertaining sequel.  I really was hoping that Athan and Aurelia would be able to find their happy ending even though both their families were being torn apart by the world at war.  This story made my heart break because they were both expected to do what their family expected them to do even though being a soldier was the last thing even of them ever wanted to do.  I won’t give too much away but I definitely recommend you reading Dark of the West before starting this story.  There is so much history between these two characters that shouldn’t be missed and believe that love can conquer anything