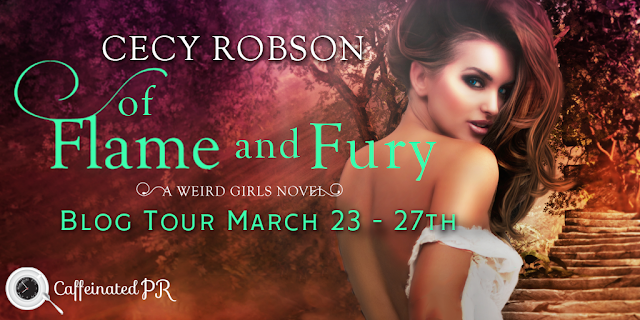 Of Flame and Fury 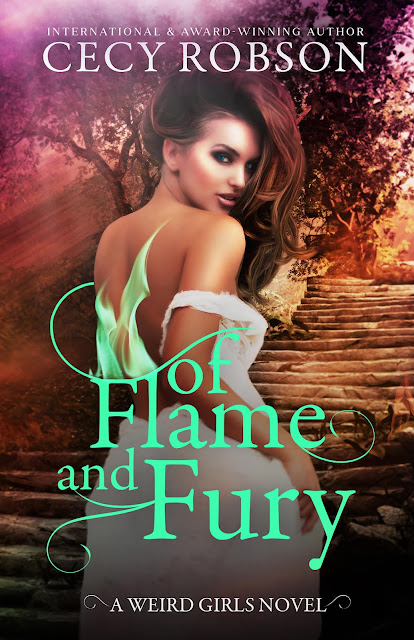 I hurry in the direction Emme disappeared and find myself in another dark hall. Bren follows, his large feet stomping behind me. He’s worked up and so is Emme. God, I hate it, and hate the wedge it’s driving between us even more. Emme used to tell us everything, in her own quiet, shy way. Now, she’s so tight-lipped, I couldn’t pry her mouth open with a crowbar. I may end up talking to Bren. Maybe he’ll be the one to crack.
“Emme,” I call out. I frown when she appears to flutter further away from me. “Emme. Emme. Wait!”
She rounds a corner and disappears into yet another hall. I pick up my pace, passing a library and a small meeting room, only for my steps to falter when the lights dim.
I turn around, the rooms we passed are gone, leaving only a long corridor of dark paneling. Everything feels off and I can no longer hear the gentle strut of Emme’s feet. “Bren?” I say.
“I don’t know,” he replies. “Come on, let’s find Emme.”
I double back and into a wall.
“What the fuck?” Bren snaps.
The hall narrows, appearing endless, the darkness swallowing what used to be the way out.
Bren’s head jerks up. “Did you hear that?”
“I don’t hear anything,” I respond slowly.
The clanging sounds from the kitchen and distant murmurs from the reception are gone. It’s just me and Bren and our increasing breaths.
“What do you hear?” I ask, keeping my voice low.
He closes his eyes, listening hard, the rise and fall of his chest growing more pronounced.
A light whisper of wind rustles from the darkness, intensifying into a pained moan as it reaches us.
“Aw, hell,” Bren says. “Stay with me, okay?”
“Ah, sure,” I say, trying to remain calm and more than failing. I turn in the direction I thought I last saw Emme. “Do you think the spells are surging now that Celia has arrived? They’re meant to keep her safe. Maybe they’re reacting to her presence.”
I whip around. The wall is gone.
So is Bren.
I inch backward, my actions dimming the lights further. My right arm shoots up, lighting up like a torch and sparing me from the blackness encasing me.
My arm lowers at the sound of splintering wood. I jump at the sight of long streaks of blood that weren’t there before.
Blood is never a good sign. It leads from bad to worse every damn time. Most would run at the sight of streaking blood. Me, being me, and knowing there’s no other escape, follows the streaks as they expand into a widening pool.
My light strobes in and out, in tune with my accelerating heart rate. The horrible silence returns, adding an extra coat of eerie. Don’t be afraid. It doesn’t last. The moans resume in another few steps, loud enough to muffle my rattling teeth.
It’s cold here, similar to the chill that accompanies death and the presence of spirits who want to make you one of them.
I reach another wall. The end. I release a breath, cursing when more moans course through the narrowing space, these much closer.
Carefully, I turn around, stopping dead when the streaks of blood move and form letters.
N-Y-T-E-S…
My light shakes from my violent trembles.
A-R-E…
The letters darken as the blood dries and cakes the wooden floors.
C-O-M-I-N-G
I jolt when something crashes on the level above. I don’t wait for more of this twisted spelling bee. I take off in a sprint, shaking might right hand. “Get us to Celia,” I tell it.
I stop abruptly and just miss crashing into a wall that appears. I shake my arm harder. I don’t typically order Sparky to do anything. I can’t. As connected as we are, she’s practically a living entity with her own set of rules I’ve yet to figure out.
“Come on, girl,” I insist. “Celia needs us.”
More by instinct than anything Sparky does, I spin, almost screaming when I see a new set of words have formed along the wall.
NYTES
HAVE
COME 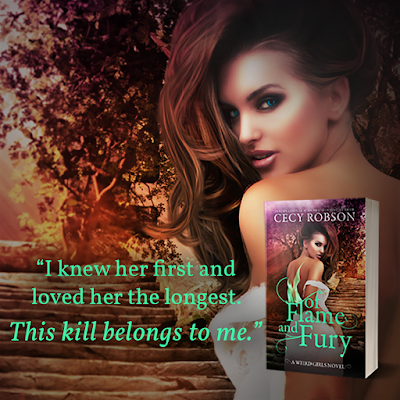 Review Of Flame and Fury

Review (4.5 Stars):  Of Flame and Fury was an epic action-packed story that will keep you on the edge of your seat.  Taran was one of my favorite characters from the Weird Girls series and I’m so glad to see her front and center in this story.  There is a mysterious dark force that will do whatever it takes to get rid of Celia and her unborn child and it is up to Taran to save her sister before it is too late.  Even if it means sacrificing Taran’s own life in the process.

This has always been one of my favorite paranormal series and Ms. Robson is such a talented writer.  These characters will make you laugh and cry and I couldn’t imagine a better series than this one.  I won’t give too much away but this story has everything in it and Taran is definitely a force to be reckoned with when it comes to her family.  She is such a bad-ass and I adore her so much. Pick this up now!!!

One Response to “Blog Tour & Review: Of Flame and Fury by Cecy Robson”