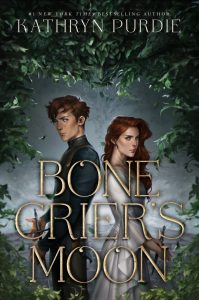 Synopsis:
Bone ​Criers have a sacred duty. They alone can keep the dead from preying on the living. But their power to ferry the spirits of the dead into goddess Elara’s Night Heavens or Tyrus’s Underworld comes from sacrifice. The gods demand a promise of dedication. And that promise comes at the cost of the Bone Criers’ one true love.
Ailesse has been prepared since birth to become the matriarch of the Bone Criers, a mysterious famille of women who use strengths drawn from animal bones to ferry dead souls. But first she must complete her rite of passage and kill the boy she’s also destined to love.
Bastien’s father was slain by a Bone Crier and he’s been seeking revenge ever since. Yet when he finally captures one, his vengeance will have to wait. Ailesse’s ritual has begun and now their fates are entwined—in life and in death.
Sabine has never had the stomach for the Bone Criers’ work. But when her best friend Ailesse is taken captive, Sabine will do whatever it takes to save her, even if it means defying their traditions—and their matriarch—to break the bond between Ailesse and Bastien. Before they all die.

Any flaws at first glance are only virtues in disguise.

If the Bone Crier wants a soulmate, I’ll give her one.

Kathryn is the #1 New York Times bestselling author of the BURNING GLASS series. Her love of storytelling began as a young girl when her dad told her about someone named Boo Radley while they listened to the film score of TO KILL A MOCKINGBIRD. Kathryn is a trained classical actress who studied at the Oxford School of Drama. She also writes songs on her guitar for each of her stories and shares them on her website. Kathryn lives in the Rocky Mountains with her husband and three children.

Review (5 Stars):  I was absolutely mesmerized by this book!!  Bone Crier’s Moon was a magical story of friendship and love and I couldn’t stop reading this book until I was done.  Ailesse and Sabine has such a strong bond and I couldn’t believe the lengths that Sabine went to so she could save her friend from Bastien.  Bastien was looking for revenge for the death of his father but found more than he bargained for when he met Ailesse. This book was so amazing and I can’t stop raving about it.