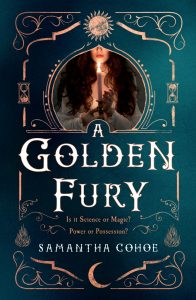 In her debut novel A Golden Fury, Samantha Cohoe weaves a story of magic and danger, where the streets of Oxford and London come to life, and the curse of the Philosopher’s Stone will haunt you long after the final chapter.

Thea Hope longs to be an alchemist out of the shadow of her famous mother. The two of them are close to creating the legendary Philosopher’s Stone—whose properties include immortality and can turn any metal into gold—but just when the promise of the Stone’s riches is in their grasp, Thea’s mother destroys the Stone in a sudden fit of violent madness.

While combing through her mother’s notes, Thea learns that there’s a curse on the Stone that causes anyone who tries to make it to lose their sanity. With the threat of the French Revolution looming, Thea is sent to Oxford for her safety, to live with the father who doesn’t know she exists.

But in Oxford, there are alchemists after the Stone who don’t believe Thea’s warning about the curse—instead, they’ll stop at nothing to steal Thea’s knowledge of how to create the Stone. But Thea can only run for so long, and soon she will have to choose: create the Stone and sacrifice her sanity, or let the people she loves die. 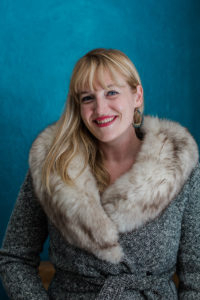 Samantha Cohoe was raised in San Luis Obispo, California, where she enjoyed an idyllic childhood of beach trips, omnivorous reading, and writing stories brimming with adverbs. She attended Thomas Aquinas College, a Great Books college in California, and graduated with a BA in liberal arts. After studying Philosophical Theology at Yale Divinity School, she decided academia wasn’t for her.

In the midst of marriage, child-bearing, and the identity crisis that followed, she rediscovered her early love of writing and adverbs. In 2011, she moved with her family to Denver, where she currently divides her time between teaching Latin, mothering, writing, reading, and deleting adverbs.

Review of A Golden Fury

Review (4.5 Stars):  A Golden Fury was a magical adventure with a race against time to protect the people you love.  Thea wants to be a famous alchemist like her mother but her mother won’t let her learn the subject anymore after they had come close to creating a potion that would turn any metal to gold.  When Thea learns that her mother is sick and anyone that tries to create the legendary Philosopher’s Stone becomes cursed, she will do whatever it takes to prevent this from happening to anyone else. Even it means putting her life on the line to prevent it.

This was such an entertaining story and I loved learning more about alchemy and how dangerous this knowledge could be.  Thea was such a great heroine and I loved her determination in trying to protect the people that she loved even if it put her life in jeopardy.  This book was an absolute delight and I can’t wait to see where this author goes next.