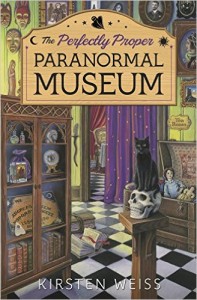 When Maddie Kosloski’s career flatlines, she retreats to her wine-country hometown for solace and cheap rent. Railroaded into managing the local paranormal museum, she’s certain the rumors of its haunting are greatly exaggerated. But a new ghost may be on the loose. A fresh corpse in the museum embroils Maddie in murders past and present.

With her high school bully as one of the officers in charge, Maddie doubts justice will be served. When one of her best friends is arrested, she’s certain it won’t be.

Maddie grapples with ghost hunters, obsessed taxidermists, and the sexy motorcyclist next door as outside forces threaten. And as she juggles spectral shenanigans with the hunt for a killer, she discovers there truly is no place like home. 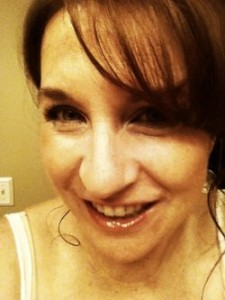 Kirsten Weiss grew up in San Mateo, California. After getting her MBA, she joined the Peace Corps, starting an international career that took her around the fringes of the defunct USSR and into the Afghan war zone. Her experiences abroad not only gave her glimpses into the darker side of human nature, but also sparked an interest in the effects of mysticism and mythology, and how both are woven into our daily lives.

She writes paranormal mystery and suspense, blending her experiences and imagination to create vivid worlds of magic and mayhem.

Kirsten has never met a dessert she didn’t like, and her guilty pleasures are watching ghost Whisperer re-runs and drinking good wine.

Review (4.5 Stars):  The Perfectly Proper Paranormal Museum was a fun-filled mischievous romp filled with colorful characters and witty dialogue that kept me entertained until the very last page.  Maddie is in between careers when she finds herself tricked into running the local paranormal museum for her best friend.  When a body is found in the museum and Maddie’s friend is accused of the crime, Maddie must find the killer before she ends up haunting the museum herself.

I can’t tell you how much I loved this book!! I loved Maddie from the very beginning and her wonderful friends. I especially loved the fact that Maddie came up with some of the greatest comebacks that I’ve ever read.  This mystery was well-written, fun and I was so sad to see this story come to an end.  This is the first book in a new series and I’m impatiently waiting to read what Maddie and the gang will be up to next.
a Rafflecopter giveaway