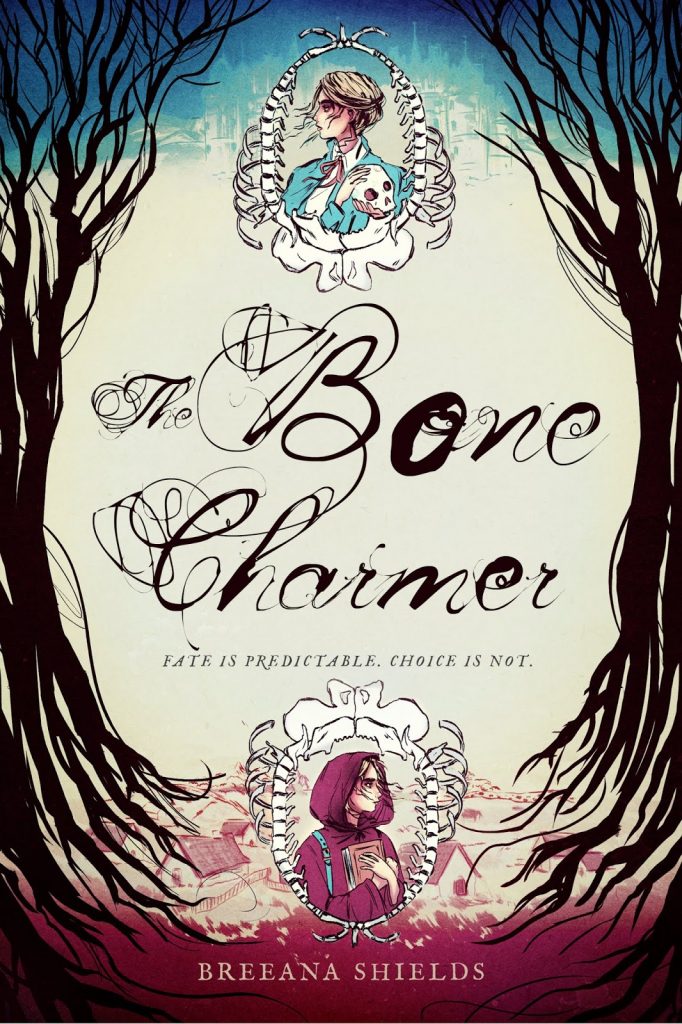 In Saskia’s world, bones are the source of all power. They tell the future, reveal the past, and expose secrets in the present. Each village has a designated seer who performs readings for the townsfolk, and in Midwood, the Bone Charmer is Saskia’s mother.
On the day of her kenning—a special bone reading that determines the apprenticeships of all seventeen-year-olds—Saskia’s worst fears come true. She receives an assignment to train as a Bone Charmer, like her mother, and even worse, a match-making reading that pairs her with Bram—a boy who has suspicious tattoos that hint of violence.
Saskia knows her mother saw multiple paths for her, yet chose one she knew Saskia wouldn’t want. Their argument leads to a fracture in one of the bones. Broken bones are always bad luck, but this particular set of bones have been infused with extra magic, and so the break has devastating consequences—Saskia’s future has split as well. Now she will live her two potential paths simultaneously. Only one future can survive. And Saskia’s life is in danger in both.

His confidence is like a shelter against the storm that rages inside me.  I can envision a life -a safe life-by his side.

My mother has never been able to resist knowing my future, no matter the cost.

Since the kenning I’ve felt like I’m standing at the summit of a steep mountain, about to be pushed from behind. I’m in danger of careening downward, out of control.

Breeana Shields is an author of fantasy novels for teens including THE BONE CHARMER, POISON’S KISS, and POISON’S CAGE. She graduated from Brigham Young University with a BA in English.
When she’s not writing, Breeana loves reading, traveling, and playing board games with her extremely competitive family. She lives in the Pacific Northwest with her husband, her three children, and two adorable, but spoiled dogs.

Review of The Bone Charmer

Review (4.5 Stars):  The Bone Charmer was an intriguing and thought-provoking story about how our life doesn’t always turn out the way that we want it to.  Saskia comes from a long line of Bone Charmers and she doesn’t plan to follow in her mother’s footsteps.  When the day comes for the bones to decide her path in life, Saskia becomes upset and breaks the special bone in half causing her to have two paths in life.  She will live each of these lives simultaneously until her mother can heal the broken bone but she must do it quickly for Saskia’s life is in jeopardy in both of them.

This book had me from the very first page and I couldn’t get enough of Saskia’s story.  The Bone Charmer was a fresh, well-written and brilliant tale that had this reader guessing how Saskia’s story would actually end.  Would she stay a Bone Charmer or a Tutor like she had originally wanted? This book is going to stay with me for some time.