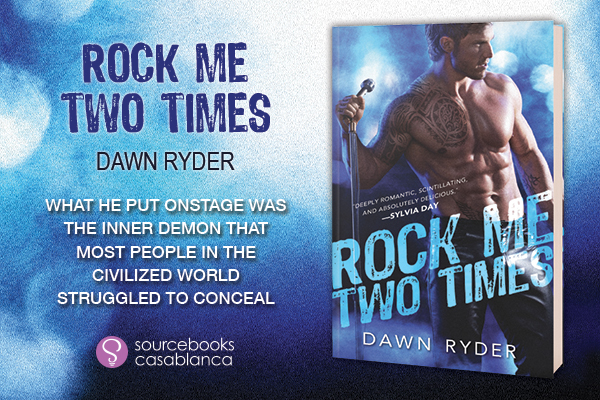 Sexiest Rock Stars (And What Makes Them So Hot!) with Dawn Ryder

Let’s face it, there is something about a man in leather, who can bring a stadium to its feet. I know there are all sorts of different music out there but heavy metal in all its formats has a certain, gut-wrenching appeal that just gets girls wanting to squeal. So here’s one of my favorites:

I’m going with a classic, Elvis Presley – This icon had a lot of the elements I felt were essential to my hero, Syon, in Rock Me Two Times. One was his love of his music. Elvis actually recorded more songs than most musicians ever do. He wanted to have a television show that showed him and his band working out new music, but was told it wouldn’t hold the attention of their audience. That sort of devotion to his craft amazes me. Elvis had music in his soul, I mean, he actually thought in it. I wanted Syon to be that way, to have his music be the root of his entire being and to have Kate come in and recognize the artist in him.

There are so many types of passion, and music is one that the world stops and listens to. If I’m lucky, someday, one of my books will captivate a reader just as completely as some of the great songs out there that everyone knows. 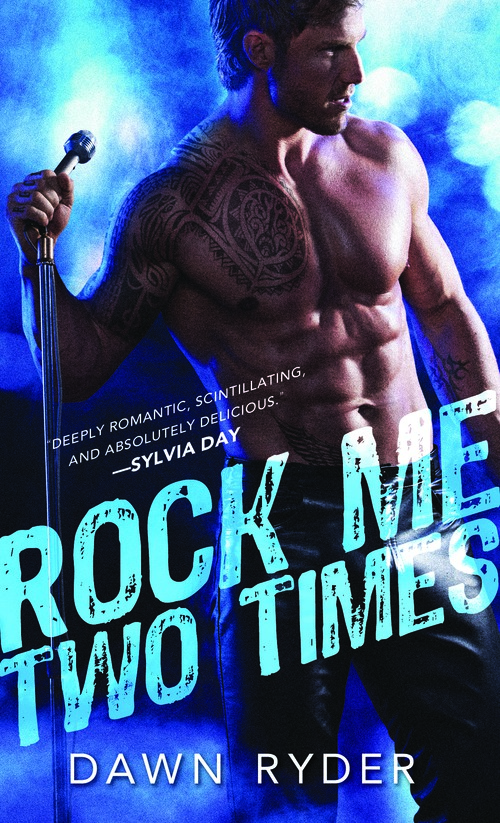 Rock star Syon Braden writes and plays the most extreme—and profitable—music from the depths of his shredded heart. He’s got a double platinum record, adoring fans, and success for his band Toxsin—but it’s what he can’t have that he craves. Custom leather designer Kate Napier has her sights set on success, and that means keeping irresistible rock stars like Syon out of her bed. The chance to tour with the band and provide them with a fantastic custom wardrobe is too major an opportunity to turn down. But immersion in the dark, wild world of Toxsin on tour means Kate’s about to get rocked…hard…body and soul.

The Staples Center was roaring.

It sounded like a tsunami coming in, or a freight train passing three feet in front of her face. It was more than sound; there was a vibration that traveled through her body, all the way down to her bones. There was a current in the air that practically crackled with excitement.

The bodyguard-slash-security guy showed Kate up to a private box. She followed because she didn’t want to squeal like a little girl and ask to be taken home.

It was embarrassing on an epic scale. She was pissed at herself for rolling over so easily for a man who wouldn’t recall her name by the end of the night.

The box had plush seats and an open rail overlooking the stage. The lights went down, and the drummer started up. The beat was infectious, taking over her heart until she was sure the muscle was keeping the same rhythm.

The crowd roared again, thrusting their hands up into the air as two guitars joined the drummer. Her nipples puckered again, her memory offering up an image of Syon arching back as he played those final chords. It was like he was pushing the music out of himself, almost as if he were giving birth.

On stage, he was just as raw.

Syon took command of the space completely. The audience ate him up.

And were they screaming. Syon worked them just as skillfully as he did his guitar. He really was lord of all he surveyed. Kate discovered herself leaning forward, being drawn toward the spellbinding energy pulsing on the stage. Sitting still was impossible; her body wanted to move in time with the notes Syon was wringing out of his instrument. She became fixated on his hands; the way he worked his fingers was downright dominant.

Her teeth were clenched  by the time the last song finished, she was panting softly and felt wrung out.

But it was fucking wonderful. She was drifting on a high and collapsed back into her padded chair, her composure scattered around her like fall leaves. She felt spent but amped up at the same time.

Fangirls were definitely climbing the respect ladder in her book.

Okay, so she was drooling over a rock star like some high schooler, but at least B.O.B.—her battery-operated boyfriend —was waiting for her at home. All in all, the buzz was worth the slightly stinging blow to her pride, because in some corner of her mind, she believed she should be grown-up enough to realize fantasies weren’t mature. So disappointment wouldn’t stalk her in the wee hours of the night.

A hollow feeling in her gut warned her she was hoping in vain.

As Syon and the rest of the band left the stage, Kate indulged herself in a long moment of reflection. Syon had worked that guitar until it wailed. He had to be hell in bed if he applied even half that effort to pleasing his partner.

She jumped, grabbing the armrests of the movie theater-style chair. Her eyes popped open wide, and her belly did a triple flip when she found Syon watching her.

“Ah…” Her tongue suddenly felt like a wad of cotton in her mouth as she scrambled to stand up and turn around to face him. “It was fantastic…”

He grinned at her, a huge, arrogantly pleased expression that showed off his perfect teeth.

God, she wondered if he knew how to bite…

Review of Rock Me Two Times

Review (4 Stars): Rock Me Two Times was a hot sexy thrill-ride with two exciting characters that couldn’t be more perfect for each other. Kate is the best when it comes to leather clothing and she is chosen at the last minute to help fix the wardrobe of ultra-sexy Syon Braden, lead singer of Toxsin.  What she never expected was that she would be immediately attracted to this enigmatic front man and this leads to an exciting rock ‘n’ roll tale that will make you crave a backstage pass.

I loved every minute of Rock Me Two Times and since this is the first book in a brand new series, I’m looking forward to seeing what is next.  Kate was a strong, independent woman who knew that she was the best at her profession.  She had sworn off musicians since they broke her heart in the past until she laid eyes on Syon.  Syon was a sexy and charming character and I loved that he was very mysterious as well.  These two characters together were electric and I loved spending time getting to know them.  Can’t wait to read the next book in the series.