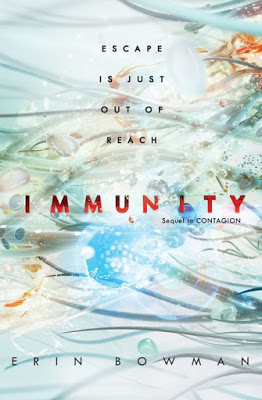 Synopsis:
Survivors of a deadly planetary outbreak take on a new, sinister adversary in the white-knuckle sequel to Contagion, which New York Times bestselling author Amie Kaufman called “gripping, thrilling and terrifying in equal measures.”
They thought their nightmare was over, but Thea, Coen, and Nova’s rescue was only the beginning. After being imprisoned on a ship they thought was their ticket to safety, it’s clear that the threat they left behind isn’t as distant as they’d hoped—and this time the entire galaxy is at risk.
Now that threat is about to be unleashed as an act of political warfare. To prevent an interstellar catastrophe, the survivors must harness the evil they faced on the planet Achlys and learn to wield the only weapon they have left: themselves.
The first installment in Erin Bowman’s duology earned a starred review from Publishers Weekly, who called the plot “intricate and action-packed,” and fans of Jonathan Maberry, Rick Yancey, and Madeline Roux will relish in Bowman’s tense, high-stakes conclusion to the events of Contagion. 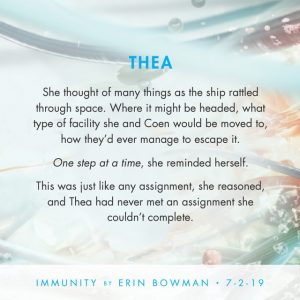 Silently, he moved to her, crossing the threshold, gathering her in his arms.

Every problem can be solved with enough time.

You once told me that impossible is just an excuse not to try.

Erin Bowman is the Edgar Award-nominated author of numerous books for teens, including the Taken Trilogy, Vengeance Road, Retribution Rails, and the Contagion duology. A web designer turned author, Erin has always been invested in telling stories—both visually and with words. When not writing, she can often be found hiking, commenting on good typography, and obsessing over all things Harry Potter. Erin lives in New Hampshire with her husband and children. You can visit her online at embowman.com, on twitter @erin_bowman, or on instagram @heyerin.
Erin is represented by Sara Crowe of Pippin Properties.

Review (5 Stars):  Contagion was one of my top books from last year because I grew up with sci-fi horror movies and Immunity was a perfect sequel for this amazing duology.  Immunity picks up right where Contagion left off and it left me gasping for air with its non-stop action and smart dialogue.  I don’t want to give to much away if you haven’t read Contagion but you need to read this series now!!  I’m still blown away by how amazing these books and I hope you that you love them too.