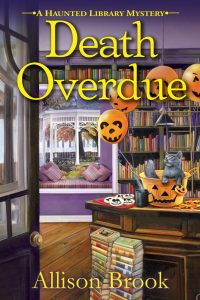 Carrie Singleton is just about done with Clover Ridge, Connecticut until she’s offered a job as the head of programs and events at the spooky local library, complete with its own librarian ghost. Her first major event is a program presented by a retired homicide detective, Al Buckley, who claims he knows who murdered Laura Foster, a much-loved part-time library aide who was bludgeoned to death fifteen years earlier. As he invites members of the audience to share stories about Laura, he suddenly keels over and dies.

The medical examiner reveals that poison is what did him in and Carrie feels responsible for having surged forward with the program despite pushback from her director. Driven by guilt, Carrie’s determined to discover who murdered the detective, convinced it’s the same man who killed Laura all those years ago. Luckily for Carrie, she has a friendly, knowledgeable ghost by her side. But as she questions the shadows surrounding Laura’s case, disturbing secrets come to light and with each step Carrie takes, she gets closer to ending up like Al.

The Unconscious at Work
Guest Post By Marilyn Levinson

I strongly believe that the art—or is it a craft? I’ve never quite decided—of fiction writing develops over a period of time. It’s a process, similar to that of a young person becoming an adult. We fiction writers learn to develop characters, invent plots, and juggle scenes. Each new book we write helps us to master our craft: of writing believable dialogue, driving suspense, and knowing how to bring the whole shebang to a satisfying conclusion. And, at some point in the journey we start to get help along the way.

A fiction writer needs a vivid imagination. Ideas come to mind at the oddest times—while driving to the doctor’s, stepping into the shower, getting ready for bed. I’ve discovered that my unconscious has been a very helpful aide when it comes to plotting my mysteries. At times I find I’m introducing an action, event or character that seems to have nothing to do with my storyline. But later this character or incident becomes a part of the plot. And since I write series, this phenomenon even crosses from one book to another.
In DEATH OVERDUE, the first book in my Haunted Library mystery series, I mention that Carrie’s father, whom she hasn’t seen in years, is a thief and a felon. This fact plays an important part in the next book, READ AND GONE. Jim Singleton shows up, asking Carrie to act as his go-between with his partner in crime. Naturally, Carrie refuses. If I had balked at making Jim a thief I never would have created the plot that emerges in the second book.

Carrie is attending a murder victim’s memorial service when Trish, her assistant, introduces her to her father. Hmmm. Now why did I do that? The answer came to me a few pages later. Trish’s father Roy played poker with the murder victim. Carrie arranges to meet Roy for breakfast to find out with he might know that can help her identify the murderer.

In READ AND GONE, Carrie’s father ends up in the hospital because…well, you’ll have to read the book to find out why. Jim introduces Carrie to his roommate. When Carrie mentions the man to Evelyn Havers, the ghost that haunts the library, Evelyn becomes very upset. She explains that years ago he swindled a large sum of money from her and her husband in a Ponzi scheme. He plays a role in book number three of the series.

I’ve learned to heed my unconscious by paying attention to sudden extraneous thoughts that come to mind because they might be relevant to my storyline. Which isn’t to say that every stray idea will become part of the plot in that book or any other in the series. A writer must learn to distinguish between superfluous musings and helpful additions. But that, too, is part of the writing process. 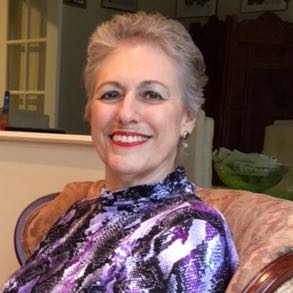 Allison Brook is the pseudonym for Marilyn Levinson, who writes mysteries, romantic suspense and novels for kids. She lives on Long Island and enjoys traveling, reading, watching foreign films, doing Sudoku and dining out. She especially loves to visit with her grandchildren on FaceTime.

Review (4 Stars):  What a charming supernatural mystery with a cast of characters that you will instantly love!  This is the first book in a brand new mystery series and I’m already hooked on this series.  Carrie is a great heroine and I enjoyed watching her navigate her way through her new position at the library while dealing with the ghost of a woman who used to work at the library.  The mystery was well-written and fun and I couldn’t get enough of this mystery.  Looking forward to reading the second book in the series, Read and Gone to see what happens next for Carrie and the gang.