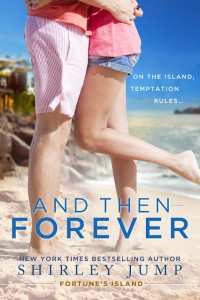 Welcome to Fortune’s Island, where the only rule is to follow your heart.

Love is an extravagance Darcy Williams can’t afford. She prefers the simple life, which includes waitressing at The Love Shack and avoiding temptation. But when a forbidden part of her past steps off the ferry, her safe, guarded existence is turned upside down.

Kincaid Foster has never gotten over his first love. When he sees the wild, beautiful blonde again, dancing her way around The Love Shack, the memories of Darcy’s soft skin, gentle touch, and heated kisses come rushing back. As the privileged son of a wealthy family, Kincaid was too young to stand up to his overbearing father when he and Darcy were together. Now, he’s back on the island—free of the family shackles—and the chiseled, big-time lawyer wants a second chance.

But, Darcy made a promise to keep a secret from Kincaid—a secret that is now a six-year-old girl who looks just like her daddy. If Kincaid finds out about their daughter, Darcy could lose everything. But, she can’t resist the man who stole her heart all those years ago. And it doesn’t take long before both of them realize that anything can happen on a hot summer night.

Just as Darcy turned toward table seven, the door to the restaurant opened, and the last bit of afternoon sun hit the floor, flooding along the wood like an instant gold river.
And Kincaid Foster walked into Darcy’s life, as easily as he’d walked out of it. Just like that.
She’d have recognized him anywhere, even though it had been seven years since she’d seen him last. Her heart stopped, and the perpetual motion that made up Darcy’s life came to a halt.
“Waitress? Hey, is that my burger? I’d like to eat today, you know.”
The voice drew Darcy back to the present. To her job. To the tray balanced on one hand. To the food getting cold while she stood here, letting Kincaid Foster have some kind of effect on her. Which he no longer did. Not at all.
She spun to the right, deposited said burger in front of a burly guy with a beard, then headed over to table seven to take their drink orders. Still, her peripheral vision kept straying to Kincaid, watching as he waited for his eyes to adjust to the dim interior, then headed across the room to the bar. He never even looked her way once.
That stung a bit, she had to admit. They’d been something once—or at least she had thought they were, until Kincaid let her go as easily as letting the wind snatch away a tissue. She’d thought he would fight for her, that she meant more than that, but…
It had taken her a year to get over him, maybe more, but she was now.
Over him. For sure.
“Uh, what did you say you wanted to order again?” she asked the middle-aged couple seated at the four-top before her. She readied a pen and her order pad, but her gaze strayed again to Kincaid. Damn, he looked good.
Still tall, muscular, with the kind of broad shoulders that seemed to welcome a heavy load. His dark hair was a little long, and one wave hooked over his right brow. She knew his hazel eyes, knew them as well as her own, knew the definition of his hands, the way his smile could make an entire room disappear.
“Miss? Miss?”
Darcy turned back. Again. “Um, sorry. What can I get you?”
The woman’s face filled with annoyance. “A menu? You seated us and said you’d be right back with menus. That was ten minutes ago. Can’t tell you what we want to eat until we know what you have to eat.”
“Oh, oh, right, sorry.” Darcy snagged two menus from the hostess station and brought them back to the table. Then she beelined for the kitchen, her brain as frazzled as a summer storm.
Before Darcy got more than a foot inside the door, Jillian was grabbing her arm and hauling her to the side. “Did you see who just walked in?”
Darcy scowled. Did the man wear a neon sign around his neck or something? “A whole bunch of customers waiting on food.”
“And Kincaid Foster.”
“I saw him.”
“And?”
“And he’s here.” She gave a casual shrug. “What’s the big deal?”
Jillian arched a brow. “You don’t care?”
“Of course not. He and I are in the past. The way past. Hell, I was barely out of high school. I hardly remember him.”
“Uh-huh. Then why are you hiding out in the kitchen?”
“I’m not hiding out. I’m waiting for an order.” She leaned against the counter and feigned impatience with the kitchen staff. “For, uh, table seven.”
Jillian grinned. “You just seated table seven. They haven’t ordered yet.”
Darcy sighed. “Okay, yes, maybe I am taking a breather in here. I just didn’t expect to see him. Ever again.”
“His family does have a house on the island.”
“That they haven’t visited in more than a decade.” Not that Darcy had been paying attention. Not one bit.
“True.” Jillian crossed her arms. “Wonder why he’s back.”
“Well, I don’t.”
Lenny put a heaping plate of buffalo wings on the warming shelf. “Order up, Darce. Table four.”
Thank God. The last thing Darcy wanted to do was stand here discussing a man who was ancient history. They were over, done. Had been for a long damned time. He was probably married to some pretty little socialite who wore twinsets and dressed their four kids in matching outfits from some designer baby offshoot.
She pushed the swinging door and headed out to the dining room. The party was ramping up as the room filled with college kids on summer break. They lingered around the jukebox in a pack, sipping at beers that dangled from their fingertips. The girls had on bikinis and sheer dresses, even though temperatures hadn’t quite hit the eighties yet. The boys hung a little behind the girls, watching their hips sway to the music.
An old Simple Plan song came on the jukebox, pounding out the lyrics to “Addicted,” with a heavy bass. For a second, Darcy was back in that summer after she graduated, that magical summer when it seemed like everything was going to be perfect.
That same summer when she’d scrawled a promise on a dollar bill, oblivious to how her life was going to change days later. 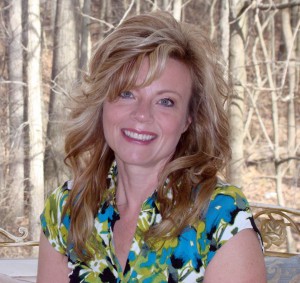 New York Times and USA Today bestselling author Shirley Jump spends her days writing romance so she can avoid the towering stack of dirty dishes, eat copious amounts of chocolate and reward herself with trips to the mall. Look for her all-new novella in the anthology ASK ME WHY (with Marie Force, Virginia Kantra and Jodi Thomas), as well as the Sweet and Savory Romance series, including the USA Today bestselling book, THE BRIDE WORE CHOCOLATE, on Amazon, and her Sweetheart Sisters series, starting with THE SWEETHEART BARGAIN.
Visit her website at www.ShirleyJump.com for author news and a booklist, and follow her on Facebook at www.Facebook.com/shirleyjump.author for giveaways and deep discussions about important things like chocolate and shoes.

Review of And Then Forever

Review (4.5 Stars): This is one of my favorite books of the year and I loved Darcy and Kincaid’s journey back to one another.  Darcy was a wonderful character that had given her heart to Kincaid all those years ago and lost him without really knowing why.  She is now hiding a secret that she doesn’t want Kincaid to learn about or she may lose her beautiful daughter to his rich powerful family.  What the two soon discover is that their feelings haven’t changed after all these years and one summer night can change their lives forever.

This was such a great romance and I’m instantly fell in love with Fortune’s Island.  Ms. Jump has a magical way of telling a story that will draw you in and never let go until the happy ever after.  This is the first book in a new romantic series and I can’t wait to see what is next for the lovely characters on Fortune’s Island.

One Response to “Blog Tour & Giveaway: And Then Forever by Shirley Jump”