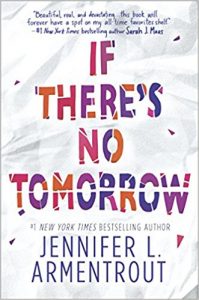 Lena Wise is always looking forward to tomorrow, especially at the start of her senior year. She’s ready to pack in as much friend time as possible, to finish college applications, and to maybe let her childhood best friend Sebastian know how she really feels about him. For Lena, the upcoming year is going to be epic—one of opportunities and chances.

Until one choice, one moment, destroys everything.

Now Lena isn’t looking forward to tomorrow. Not when friend time may never be the same. Not when college applications feel all but impossible. Not when Sebastian might never forgive her for what happened.

For what she let happen.

When she’s not hard at work writing, she spends her time, reading, working out, watching zombie movies, and pretending to write. She shares her home with her husband, his K-9 partner named Diesel and her hyper Jack Russell Loki. Her dreams of becoming an author started in algebra class, where she spent her time writing short stories, therefore explaining her dismal grades in math. Jennifer writes Young Adult Contemporary, Urban Fantasy/Paranormal and Romance. She writes New Adult and Adult romance under the pen name J.Lynn.

She is the author of the Covenant Series (Spencer Hill Press) the Lux Series (Entangled Teen) and the upcoming YA Don’t Look Back (2014) and untitled YA (Fall 2014) from Disney/Hyperion. She is also published with Harlequin Teen and HarperCollins.

One Response to “Excerpt Blog Tour: If There’s No Tomorrow by Jennifer L. Armentrout”