Thanks for sharing in the reveal for the first book in my upcoming Covert Heiresses series, about four women who by day are the talk of the ton, and by night are England’s top spies.

I Spy a Duke introduces James Spencer, Duke of Abermont, and Vivienne Loren, a governess with a secret agenda. 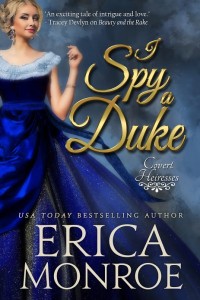 Cover designed by Designs by BMB

Blurb: She wants revenge…
When bluestocking Vivienne Loren becomes the governess for the wealthy Spencer family, she’s searching for clues about the murder of her brother, not a husband. But Vivienne didn’t count on James Spencer, the autocratic and infuriatingly handsome Duke of Abermont.
He needs a wife…
As head of Britain’s elite intelligence agency, James has no time to woo a wife. When he discovers Vivienne’s thirst for revenge has made her a pawn in the treacherous plot, James realizes they can help each other. She’ll become his duchess, and he’ll keep her safe from one of Napoleon’s deadliest spies.
What begins as a marriage of convenience quickly becomes anything but, as they find out love is the most dangerous mission of all.

Release Info: I Spy a Duke releases October 5, 2015.
Special sale price of 99c for preorder – get it now before it returns to full price

Author Bio:
Erica Monroe is a USA Today Bestselling Author of emotional, suspenseful historical romance. Her debut novel, A Dangerous Invitation, has been nominated in the published historical category for the prestigious 2014 Daphne du Maurier Award for Excellence in Romantic Suspense. When not writing, she is a chronic TV watcher, sci-fi junkie, comic book reader, pit bull lover, and slow runner. She lives in the suburbs of North Carolina with her husband, two dogs, and a cat.

One Response to “Cover Reveal: I Spy A Duke by Erica Monroe”