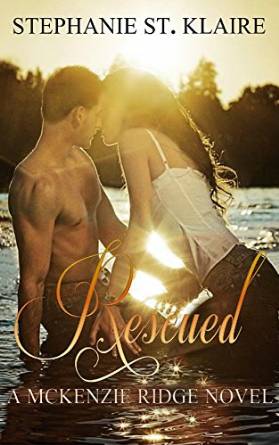 Just as the walls start to come down, boundaries redefine, and things heat up, tragedy hits the small mountain town of McKenzie Ridge.

Sexy EMT Dawson Tayler made hearts break, and panties melt with a single look. Far from home, in the charming tourist town, he lives a simple life his family would be appalled by – if they were alive. Dawson suddenly finds his satisfying life, emotionless as it was, changing the night he nearly loses her.

The storming ball of fire, that is Nurse Sam Taylor, defined the word fighter. At five feet and a handful of inches, beautiful Sam was kind, giving, and a complete hard ass. Abandonment was a lesson Sam learned early on, leaving her with a hardened heart as a result. Men were as necessary as a hang nail and weren’t part of her plan, until him.

After months of shameless flirting, and generating steam everyone in their circle could see but them, the unlikely couple agreed to a friend’s only breakfast that turned into every morning – for weeks. Committed to the single life, this was not a relationship, and they definitely were not dating.

Does Dawson’s past and present collide and ruin what they have built? Will her secret be the deal breaker that ends this affair, before it even begins? Their steamy romance rushes through suspenseful twists, turns, and malice. Will Dawson and Sam find a happily ever after, or, is there someone else lurking in McKenzie Ridge trying to destroy it all?

Review (5 Stars): Rescued is an emotionally charged small-town romance that captivated me from beginning to end.  I connected with Sam instantly because she was a strong, intelligent and determined young woman.  She had a great job as a nurse and people that she could count on at home.  I’m a nurse as well, so Sam holds a special place in my heart because I’ve worked with nurses just like Sam and I could definitely see her strong-willed character in my head.  Dawson was definitely a charmer and I knew that it was just a matter of time before Sam fell head over heels for him.  Their romance had a few bumps on the way but I’m so glad that they found their way back to each other.

This is the first book in the McKenzie Ridge series and Ms. St. Klaire has a winner on her hands.  The characters, the town setting in Oregon, and a love story that you can lost in, has made me a huge fan.  I heard that book two is on the way and it can’t get into my hands fast enough.