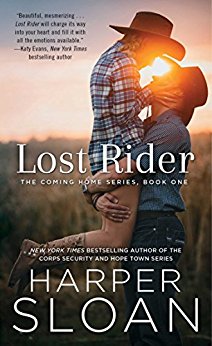 In Lost Rider, the first Western romance in New York Times and USA TODAY bestselling author Harper Sloan’s Coming Home series, an injured rodeo star encounters an old flame but will she be just what he needs to get back in the saddle?

Maverick Austin Davis is forced to return home after a ten-year career as a rodeo star. After one too many head injuries, he’s off the circuit and in the horse farming business, something he’s never taken much of a shine to, but now that it’s his late father’s legacy, familial duty calls. How will Maverick find his way after the only dream he ever had for himself is over?

Enter Leighton Elizabeth James, an ugly duckling turned beauty from Maverick’s childhood—his younger sister’s best friend, to be exact, and someone whose heart he stomped all over when she confessed her crush to him ten years back. Now Leighton is back in Maverick’s life, no longer the insecure, love-stricken teen—and Maverick can’t help but take notice. Sparks fly between them, but will Leighton be able to open her heart to the one man who broke it all those years ago? 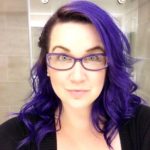 Harper started using writing as a way to unwind when the house went to sleep at night; and with a house full of crazy, it was the perfect way to just relax. It didn’t take long before a head full of very demanding alphas would stop at nothing to have their story told.

Review (4 Stars): Lost Rider is a beautiful story of love healing the wounds of the past so that these two characters could build a future with one another.  Maverick Davis was forced to return home for the funeral of his father and dealing with the end of his career as a rodeo rider.  While he tries to deal with the new changes in his life, he comes face to face with his past mistakes including the things he did to his family and his childhood friend, Leighton James.  The woman that Maverick knew when he left town has now grown into a beautiful young woman and she isn’t about to put up with Maverick being a jerk to the people that she has cared about since he has been gone.  Can Maverick make up for the sins of his past and prove to Leigh that he has changed for good or is it too late to fix her broken heart?

I really enjoyed Lost Rider and these two characters were definitely made for each other.  By leaving town and chasing his dreams, Maverick realized that what he was always looking for was left behind with his family and Leigh.  Maverick and Leigh had a long history in the beginning of this book because she was the best friend of his younger sister.  He made the mistake of saying hurtful things to Leigh while growing up and Leigh still felt the pain from that night. Even though Leigh always knew that Mav was the one for her she had hoped that he would someday realize that and come back to her.

By coming back home for his father’s funeral, he had to finally deal with the pain of the past and the damage that he caused to Leigh. That meant doing everything to convince her that she was his future and he would spend a lifetime trying to mend her broken heart. Some of those things were beautiful and made this reader cry especially the restaurant scene.  She was “home” for Maverick and he finally found the peace that he needed by just being with her.

Lost Rider is the first book in the Coming Home series and this romance was very touching for me.  These two characters had been through so much and they finally found the love that they needed with each other. Looking forward to reading the next book in the series and I will be sure to have the tissues ready.