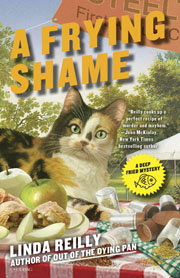 The town of Wrensdale is abuzz with excitement when Steeltop Foods sponsors a contest to promote its new product, the Flavor Dial. With a $25,000 prize at stake, all the contestants are on edge, including Talia Marby, owner of Fry Me a Sliver. She hopes her mini deep-fried apple pies will win her the money to pay off the renovations on her restaurant.

But when Norma Ferguson wins with her flaky-top chicken stew, the tensions dial up even more. After Norma is found dead at her cooking station, the police suspect a losing contestant got too hot under the collar. Now Talia must work to catch the killer before another cook gets burned . . 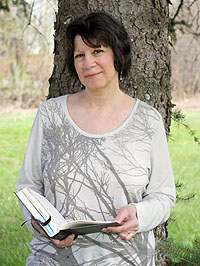 Raised in a sleepy town in the Berkshires, Linda Reilly has spent the bulk of her career in the field of real estate closings and title examination. It wasn’t until 1995 that her first short mystery, Out of Luck, was accepted for publication by Woman’s World Magazine. Since then she’s had over forty short stories published, including a sprinkling of romances. In 2013 Five Star Publishing released her first full-length mystery, Some Enchanted Murder. Her first mystery in the Deep Fried series, a cozy featuring fry cook Talia Marby, was released by Berkley Prime Crime in May 2015.

Linda lives in New Hampshire with her husband, who affectionately calls her “Nose-in-a-book.”