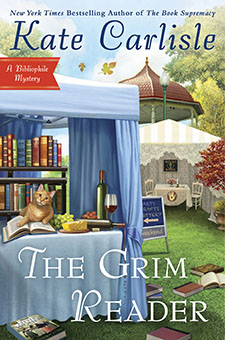 San Francisco book-restoration expert Brooklyn Wainwright was hoping for a fun, relaxing weekend at a local book fair, but a murderer made other plans in the latest in this New York Times bestselling series.

Brooklyn and her new hunky husband, Derek, are excited to be guests at Dharma’s first annual Book Festival. The entire town is involved and Brooklyn’s mom Rebecca is taking charge. In addition to all of her other event related duties, she’s got Brooklyn doing rare book appraisals and is also staging Little Women, the musical to delight the festival goers. If that wasn’t enough, she and Meg, Derek’s mom, will have a booth where they read palms and conduct séances.

Brooklyn couldn’t be prouder of her mom’s do-it-all attitude so when a greedy local businessman who seems intent on destroying Dharma starts harassing Rebecca, Brooklyn is ready to take him down. Rebecca is able to hold her own with the nasty jerk until one of her fellow festival committee members is brutally murdered and the money for the festival seems to have vanished into thin air.

Things get even more personal when one of Brooklyn’s nearest and dearest is nearly run down in cold blood. Brooklyn and Derek go into attack mode and the pressure is on to catch a spineless killer before they find themselves skipping the festival for a funeral.

New York Times bestselling author Kate Carlisle is a native Californian who worked in television production for many years before turning to writing. It was a lifelong fascination with the art and craft of bookbinding that led her to write the Bibliophile Mysteries, featuring Brooklyn Wainwright, whose bookbinding and restoration skills invariably uncover old secrets, treachery and murder. Her first book, Homicide in Hardcover, debuted in February 2010, followed by If Books Could Kill, The Lies That Bind, Murder Under Cover, One Book in the Grave, Peril in Paperback, A Cookbook Conspiracy, The Book Stops Here, Ripped from the Pages, Books of a Feather, Once Upon a Spine, Buried in Books, The Book Supremacy and The Grim Reader. She also wrote a Bibliophile e-novella, Pages of Sin, available in e-format only.

With the publication of A High-End Finish in November 2014, Kate launched the Fixer-Upper Mysteries featuring building contractor Shannon Hammer, who specializes in Victorian home renovation and repair. The series is set in Lighthouse Cove, a seemingly idyllic town with many dark secrets hiding under its floorboards. This Old Homicide, Crowned and Moldering, Deck the Hallways, Eaves of Destruction, A Wrench in the Works and Shot Through the Hearth continue the series. Three of the Fixer-Upper Mysteries have been brought to the small screen by Hallmark Movies & Mysteries.

Review of The Grim Reader

Review (4 Stars):  Brooklyn is one of my favorite heroines and I love spending time with her!!  The Grim Reader is a delightful and charming mystery that takes place in an amazing location, Dharma. Brooklyn’s Mom has put together a Book Festival in this cozy little community and everything is going great until the body of one of the committee members is found.  Now, it is up to Brooklyn and Derek to find another killer before all the Book Festival plans get scrapped for good.

The Grim Reader is a great mystery and even if you haven’t read the rest of the series, it will be easy for you to follow right along.  I loved watch Brooklyn and Derek’s relationship grow in this story and I wanted to go visit the First Annual Book Festival in Dharma too.  Fun, exciting series and I hope there are many more books to come.