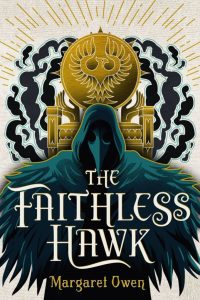 As the new chieftain of the Crows, Fie knows better than to expect a royal to keep his word. Still she’s hopeful that Prince Jasimir will fulfill his oath to protect her fellow Crows. But then black smoke fills the sky, signaling the death of King Surimir and the beginning of Queen Rhusana’s merciless bid for the throne.

With the witch queen using the deadly plague to unite the nation of Sabor against Crows—and add numbers to her monstrous army—Fie and her band are forced to go into hiding, leaving the country to be ravaged by the plague. However, they’re all running out of time before the Crows starve in exile and Sabor is lost forever.

A desperate Fie calls on old allies to help take Rhusana down from within her own walls. But inside the royal palace, the only difference between a conqueror and a thief is an army. To survive, Fie must unravel not only Rhusana’s plot, but ancient secrets of the Crows—secrets that could save her people, or set the world ablaze.

“I have standards. It’ll take more than a moon apart for me to roll a lad in a pile of guts.”

“I guess the presence of the Phoenixes makes it a miracle?”

Born and raised at the end of the Oregon Trail, Margaret Owen first encountered an author in the wild in fourth grade. Roughly twenty seconds later, she decided she too would be an author, the first of many well-thought-out life decisions.

The career plan shifted frequently as Margaret spent her childhood haunting the halls of Powell’s Books. After earning her degree in Japanese, her love of espresso called her north to Seattle, where she worked in everything from thrift stores to presidential campaigns. The common thread between every job can be summed up as: lessons were learned.

Fortunately, it turned out that fourth-grade Margaret was onto something. She now spends her days wrestling disgruntled characters onto the page, and negotiating a long-term hostage situation with her two monstrous cats. (There is surprisingly little difference between the two.) In her free time, she enjoys exploring ill-advised travel destinations, and raising money for social justice nonprofits through her illustrations.

Review of The Faithless Hawk

Review (5 Stars):  The Mericful Crow was one of my favorite books last year and I was so excited when I got the opportunity to read its sequel, The Faithless Hawk.  I loved how this book picked up pretty much after the events of the first one, with Fie still maintaining her duties as Chieftain of the Crows.  I enjoyed watching her grow over the course of this story from an unsure young girl to a strong leader willing to do whatever it takes to protect her group.  The Faithless Hawk was filled with adventure, magic and a strong heroine that you will be rooting for.  This book to me was much better than the first book and I’m looking forward to reading this series over and over again in the future.