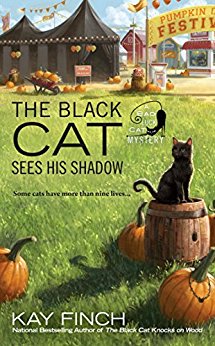 The town of Lavender, Texas is buzzing with tourists, and local businesses are pulling out all the stops for the annual Pumpkin Days Festival. On the eve of opening day, Sabrina comes face-to-face with her doppelgänger, Tia Hartwell, a caricature artist at the festival. The similarities between the two women are striking, including their matching black cats.

Sabrina learns that her new twin Tia has an enemy: bad-tempered jewelry vendor Calvin Fisher. When Fisher is found slumped over dead in his pickup, Tia tops the suspect list. With the help of her feline sidekick, Sabrina must clear her new look-alike friend before she finds herself in a deadly case of double jeopardy. 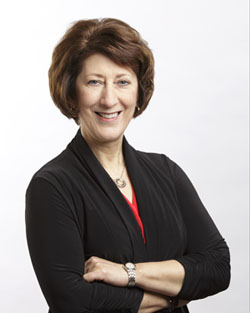 Kay Finch grew up on a Pennsylvania farm but she got to Texas as fast as she could and discovered the Texas Hill Country, setting of her Bad Luck Cat mysteries. As a child Kay wrote mystery stories, but it wasn’t until she went to work for a renowned criminal defense attorney in Houston that plot ideas began to flow. In addition to the Bad Luck Cat mysteries, Kay has written the Corie McKenna PI mysteries, Final Decree and Final Cut, and Relative Chaos, a Klutter Killer mystery. Kay is a long-time member of Mystery Writers of America, Sisters in Crime, and the State Bar of Texas Paralegal Division. She lives with her husband, a rescue cat, and two wild and crazy rescue dogs in a Houston suburb.

Review of The Black Cat Sees His Shadow

Review (4 Stars):  The Black Cat Sees His Shadow was a delightfully entertaining read.  Sabrina and her furry sidekick, Hitchcock, are enjoying the annual Pumpkins Day Festival with her friends and neighbors when she runs into a young woman, Tia, that could easily be her twin.  Tia and her son are new to Lavender, following different festivals trying to pay the bills but has been having trouble with fellow vendor, Calvin Fisher.  When Calvin ends up dead and witnesses put Tia near the scene of the crime, it is up Sabrina to find a killer before it is too late.

This is the third mystery in the Bad Luck Cat series and each story is more charming than the last.  I adore Hitchcock and all the sneaky ways he gets himself in trouble as well as Sabrina’s sassy personality.  The residents of Lavender, Texas are always a treat and I can’t wait to see what happens next for Sabrina and her furry best friend.