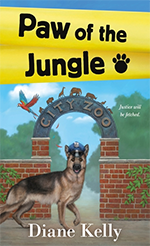 Police officer Megan Luz and her K-9 partner in crime, Brigit, are on all fours as they try to solve their latest Lone Star mystery.

AT THE ZOO
The weather is beautiful, work is slow, and her canine colleague could use a walk. What better day for Megan to take Brigit to the Fort Worth Zoo, where they can let loose and witness the law and order of nature unfold? But what begins as a fun field trip turns serious when a pair of rare hyacinth macaws named Fabiana and Fernando goes missing. Is the new custodian, a gentle soul who happens to be an ex-convict, to blame? Or is something far more sinister afoot?

AND ON THE HUNT
The birds are worth thousands of dollars, and the list of people on the premises who might have stolen them is long. Soon other animals start disappearing. . .and Megan and Brigit have their hands and paws full of suspects. But when a rare black rhino is taken from the zoo, presumably for its black-market-friendly horn, time is of the essence. Can Megan and Brigit find out who’s behind the mystery—before they too become prey? 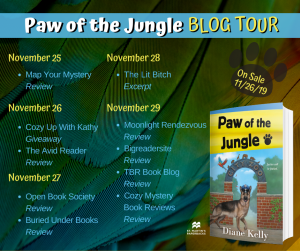 Author Bio:
Diane Kelly is a former state assistant attorney general and tax adviser who spent much of her career fighting, or inadvertently working for, white-collar criminals. She is also a proud graduate of the Mansfield, Texas Citizens Police Academy. The first book in Diane’s IRS Special Agent Tara Holloway series, Death, Taxes, and a French Manicure, received a Romance Writers of America Golden Heart Award. Book #2, Death, Taxes, and a Skinny No-Whip Latte, won a Reviewers Choice award. Diane has combined her fascination with law enforcement and her love of animals in her K-9 cop Paw Enforcement series.

Review of Paw of the Jungle

Review (4 Stars): Paw of the Jungle was a fun, entertaining cozy mystery.  I loved spending time with Megan and Brigit and could easily follow along with the story even though this is the first book I’ve read in the series.  Megan was a character that you will instantly connect with and I can’t wait to go back and read the rest of the series.  Great story.