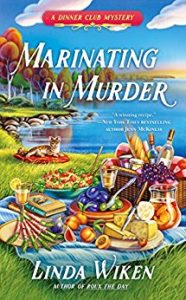 The Culinary Capers Dinner Club is planning a fall picnic for their next meeting. What could be better than sharing delicious food with friends under a beautiful autumn sky? But when club member Alison Malkovich opens the back of her SUV to load in the picnic supplies, she finds a dead body. To make things worse, it’s the body of her ex-husband, and now she’s the prime suspect. Because Alison is a police officer, she is suspended and warned not to do any investigating of her own. That’s not about to stop J.J. and the Culinary Capers gang though. They know that Alison is innocent, and after all, they do have some experience solving crimes. 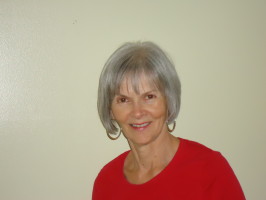 She embarked on a new writing adventure this year as the real Linda Wiken with another series, the Dinner Club Mysteries, also from Berkley Prime Crime. The first book, Toasting Up Trouble, is now available.  The second, Roux the Day, came out in March, 2017.

Before life in the world of mystery, she worked as an advertising copywriter, radio producer, journalist and community education worker.   ).

As a volunteer with the Ottawa Police Service for over 15 years, she developed a strong, sometimes scary interest in police procedures. She wrote weekly crime stats articles for the local community newspapers for them, along with stories for the OPS internal newsletter.

She is an avid chorister and loves being a choir member.

Keeshas and Mojo, her two Siamese cats, share their house with her in Ottawa, ON where she’s lived for over 30 years (she was soooo young when she first arrived in town!).

Review of Marinating in Murder

Review (4.5 Stars):  I love culinary mysteries and every time I read a book from this series, I want to start my own culinary club just so we can share recipes.  This is the third in the Dinner Club mystery series and in this one, J.J. must help her friend, Alison, find out who murdered her ex-husband and is trying to pin the crime onto her.

I like J.J. because she is just a fun, sweet character for this series.  Her relationships with the other characters are well-developed, which made me feel really sad for what Alison was going through in this book.  Marinating in Murder is my favorite book in the series so far and this is one of those series readers can never get enough of. Looking forward to reading book number four next year.

One Response to “Blog Tour & Review: Marinating in Murder by Linda Wiken”