Synopsis:
I am Renata Convida.
I have lived a hundred stolen lives.
Now I live my own.
Renata Convida was only a child when she was kidnapped by the King’s Justice and brought to the luxurious palace of Andalucia. As a Robari, the rarest and most feared of the magical Moria, Renata’s ability to steal memories from royal enemies enabled the King’s Wrath, a siege that resulted in the deaths of thousands of her own people.
Now Renata is one of the Whispers, rebel spies working against the crown and helping the remaining Moria escape the kingdom bent on their destruction. The Whispers may have rescued Renata from the palace years ago, but she cannot escape their mistrust and hatred–or the overpowering memories of the hundreds of souls she turned “hollow” during her time in the palace.
When Dez, the commander of her unit, is taken captive by the notorious Sangrado Prince, Renata will do anything to save the boy whose love makes her place among the Whispers bearable. But a disastrous rescue attempt means Renata must return to the palace under cover and complete Dez’s top secret mission. Can Renata convince her former captors that she remains loyal, even as she burns for vengeance against the brutal, enigmatic prince? Her life and the fate of the Moria depend on it.
But returning to the palace stirs childhood memories long locked away. As Renata grows more deeply embedded in the politics of the royal court, she uncovers a secret in her past that could change the entire fate of the kingdom–and end the war that has cost her everything. 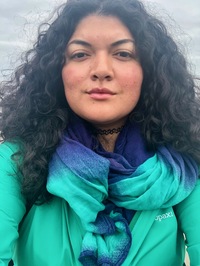 Zoraida Córdova is the author of many fantasy novels including Star Wars: A Crash of Fate, the Brooklyn Brujas series, and The Vicious Deep trilogy. Her novel Labyrinth Lost won the International Book Award for Best Young Adult Novel in 2017. Her short fiction has appeared in the New York Times bestselling anthology Star Wars: From a Certain Point of View, and Toil & Trouble: 15 Tales of Women and Witchcraft. Her upcoming books include Incendiary, book one in the Hollow Crown duology (Hyperion 2020) and she’s the co-editor of Vampires Never Get Old (Imprint 2020). Zoraida was born in Ecuador and raised in Queens, New York. When she isn’t working on her next novel, she’s planning her next adventure.

Review (5 Stars): Incendiary was an amazing epic adventure that I couldn’t get enough of.  Ren was trying so hard to find her place among the whispers while unlocking her own lost memories.  When her love is captured, Ren will do whatever it takes to help him and bring down the evil prince.  I was swept away with this story and couldn’t get enough of Ren and Dez.  I’m ready for book number two so I can see how this story continues.