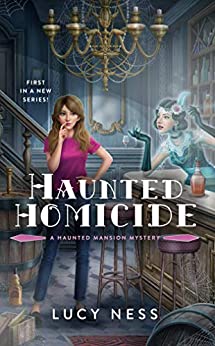 Avery Morgan has had a harrowing first week on the job as manager of the Portage Path Woman’s Club. Not only is she in charge of a grand old home with a mountain of maintenance problems and scheduling nightmares–thanks to a recent fire in the Marigold meeting room–but she’s also got Muriel Sadler to deal with. Muriel is the current president of the club, the one “nay” vote when the rest of the board voted “aye” to hiring Avery.

After a morning of dealing with another one of Muriel’s snits and a meeting with the delicious and delightfully unsettling Ben Harkness, who will be handling renovations in the fire-damaged portions of the house, the last thing Avery needs is for one of the fuses to blow. Again.

She grabs her handy flashlight and heads into the basement, where she stumbles across Muriel’s body. She also stumbles across an unexpected helper, Clemmie Bow, the ghost of a young woman who was accidentally killed in the building almost a hundred years ago.

Together Clemmie and Avery are determined to solve Muriel’s murder before the killer sends Avery to join Clemmie on the other side.

Review (4.5 Stars): I loved this book!!!!! Avery was an amazing character and I loved spending time with her.  Her family is made up of spiritualists and she recently took a new job at PPWC to take her as far away from her family as she could.  She never expected that her first day on the job would be dealing with a quirky cast of coworkers and restoring the fire-damaged parts of the house. To top it off, she finds a dead body in the basement with a ghost that is willing to help her solve the case.

Haunted Homicide was a fun, cozy mystery that was just a spookish delight.  I adored Avery and this mystery was a joy from beginning to end.  Haunted Homicide is the first book in a brand new series and this was a winner for me.  Looking forward to more of Avery and Clemmie together in future mysteries.