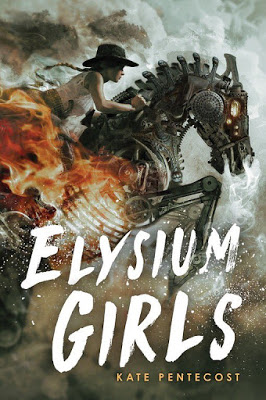 Synopsis:
In this sweeping Dust Bowl-inspired fantasy, a ten-year game between Life and Death pits the walled Oklahoma city of Elysium-including a girl gang of witches and a demon who longs for humanity-against the supernatural in order to judge mankind.
When Sal is named Successor to Mother Morevna, a powerful witch and leader of Elysium, she jumps at the chance to prove herself to the town. Ever since she was a kid, Sal has been plagued by false visions of rain, and though people think she’s a liar, she knows she’s a leader. Even the arrival of enigmatic outsider Asa-a human-obsessed demon in disguise-doesn’t shake her confidence in her ability. Until a terrible mistake results in both Sal and Asa’s exile into the Desert of Dust and Steel.
Face-to-face with a brutal, unforgiving landscape, Sal and Asa join a gang of girls headed by another Elysium exile-and young witch herself-Olivia Rosales. In order to atone for their mistake, they create a cavalry of magic powered, scrap metal horses to save Elysium from the coming apocalypse. But Sal, Asa, and Olivia must do more than simply tip the scales in Elysium’s favor-only by reinventing the rules can they beat the Life and Death at their own game.

Given her many advantages, I want to exercise one of my own: I am choosing my wildcard.

I grew to understand that all these plucky young heroines were me in disguise. Kate Pentecost was born and raised on the Texas/Louisiana border, where ghosts and rural legends lurk in the pines and nothing is completely as it seems.
She holds an MFA in Writing for Children &Young Adults from Vermont College of Fine Arts. She was recently nominated for a Rhysling award for her poem “Small Town Witches.”
Her debut novel, Elysium Girls, is forthcoming from Disney Hyperion in 2020 in print and audio formats.
She is obsessed with the Romantic Poets and can be identified by the enormous tattoo of Percy Bysshe Shelley on her arm. She lives in Houston (H-Town, Space City, etc.)

Review (4.0 Stars):  Elysium Girls was a fascinating tale that was a race against time to save mankind.  Sal’s little city had ten years to prove itself during a game of life and death, otherwise they all would perish.  This story kept me at the edge of my seat and I was rooting for Sal every step of the way.  This book was amazing and I enjoyed every minute of it.