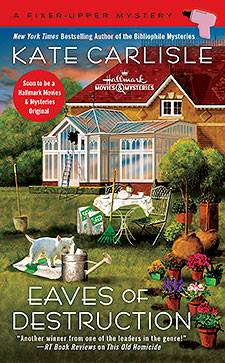 At the annual Victorian Home and Garden Tour, Lighthouse Cove, California’s premier contractor, Shannon Hammer, realizes that the competition is about to turn deadly….

Shannon is in high demand among rival homeowners, who will do anything to win Best in Show. One-upmanship and even espionage break out among neighbors, construction crews, decorators, and landscapers. Thanks to several new hires, Shannon is sure she can handle the extra load—until murder throws a wrench in the works.

The small town’s corrupt building inspector is found dead on one of Shannon’s jobsites, and soon plenty of suspects are coming out of the woodwork. When another body is discovered, Shannon calls on her team of close friends and devilishly astute thriller writer Mac to help her nail down the details and build a case against the killer before the door shuts on someone else—for good.

New York Times bestselling author Kate Carlisle is a native Californian who worked in television production for many years before turning to writing. It was a lifelong fascination with the art and craft of bookbinding that led her to write the Bibliophile Mysteries, featuring Brooklyn Wainwright, whose bookbinding and restoration skills invariably uncover old secrets, treachery and murder. Her first book, Homicide in Hardcover, debuted in February 2010, followed by If Books Could Kill, The Lies That Bind, Murder Under Cover, One Book in the Grave, Peril in Paperback, A Cookbook Conspiracy, The Book Stops Here, Ripped from the Pages, Books of a Feather and Once Upon a Spine. She also wrote a Bibliophile e-novella, Pages of Sin, available in e-format only.

With the publication of A High-End Finish in November 2014, Kate launched the Fixer-Upper Mysteries featuring building contractor Shannon Hammer, who specializes in Victorian home renovation and repair. The series is set in Lighthouse Cove, a seemingly idyllic town with many dark secrets hiding under its floorboards. This Old Homicide, Crowned and Moldering, Deck the Hallways and Eaves of Destruction continue the series. Hallmark Movies & Mysteries Channel is bringing the Fixer-Upper Mysteries to TV in a series of movies starring Jewel and Colin Ferguson. The first movie premiered in January 2017, with plans to film several more.

Kate also studied acting and singing, toiled in vineyards, collected books, joined a commune, sold fried chicken, modeled spring fashions and worked for a cruise ship line, but it was the year she spent in law school that finally drove her to begin writing fiction. It seemed the safest way to kill off her professors. Those professors are breathing easier now that Kate spends most of her time writing near the beach in Southern California where she lives with her perfect hero husband.

Review of Eaves of Destruction

Review (5 Stars): This is one of my absolute favorite mystery series and I was so excited to get my hands on Eaves of Destruction.  In this book, Shannon has her hands full with an unruly customer that wants her home finished in time to compete for the Home and Garden tour.  When the body of the building inspector is found in one of her client’s orangery, Shannon needs to find a killer fast before she or her crew becomes their next victim.

Shannon is one of my favorite heroines and I love spending time in each of Ms. Carlisle’s fixer-upper mysteries.  Eaves of Destruction was a killer who-dunnit with the right amount of humor and suspense.  This is the fifth book of the series and Shannon’s sharp wit and mystery-solving skills always has me coming back for more.  Can’t wait to get my hands on the next book in the series and see what happens next for Shannon and her crew.