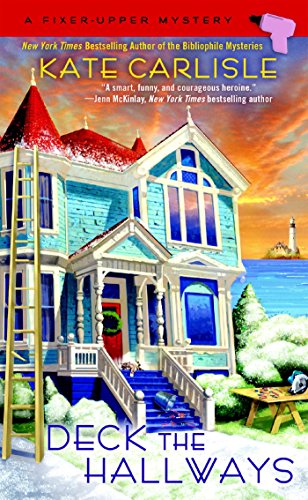 Someone’s been slayed! If contractor Shannon Hammer can’t nail the real culprit in the St. Nick of time, her dad will wind up in the clink…

Even at Christmastime, Shannon is more spackle than sparkle, which is why she leaps at the chance to transform a grand old Victorian mansion into ten charming apartments for homeless families. Filled with the spirit of the season, all of Lighthouse Cove turns out to help—including her best friends, a troupe of far-from-angelic Santa Claus impersonators, and her father, Jack.

But their merriment is soon dashed by a heated scuffle between Jack and the miserly president of the bank who’s backing the project. When the man is murdered, all eyes are on Jack, and visions of prison time dance in Shannon’s head. Now, she needs to pull off a crime-solving miracle, before her father’s Christmas goose is cooked…

New York Times bestselling author Kate Carlisle is a native Californian who worked in television production for many years before turning to writing. It was a lifelong fascination with the art and craft of bookbinding that led her to write the Bibliophile Mysteries, featuring Brooklyn Wainwright, whose bookbinding and restoration skills invariably uncover old secrets, treachery and murder. Her first book, Homicide in Hardcover, debuted in February 2010, followed by If Books Could Kill, The Lies That Bind, Murder Under Cover, One Book in the Grave, Peril in Paperback, A Cookbook Conspiracy, The Book Stops Here, Ripped from the Pages, Books of a Feather and Once Upon a Spine. She also wrote a Bibliophile e-novella, Pages of Sin, available in e-format only.

With the publication of A High-End Finish in November 2014, Kate launched the Fixer-Upper Mysteries featuring building contractor Shannon Hammer, who specializes in Victorian home renovation and repair. The series is set in Lighthouse Cove, a seemingly idyllic town with many dark secrets hiding under its floorboards. This Old Homicide, Crowned and Moldering and Deck the Hallways continue the series.

Kate’s television credits include numerous game shows, music videos, concerts, and variety shows, including The Midnight Special, Solid Gold and The Gong Show. She traveled the world as a Dating Game chaperone and performed strange acts of silliness on The Gong Show, most notably as a member of the girl group, The Whispers. They didn’t sing, exactly, but spit water on the host of the show.

Kate also studied acting and singing, toiled in vineyards, collected books, joined a commune, sold fried chicken, modeled spring fashions and worked for a cruise ship line, but it was the year she spent in law school that finally drove her to begin writing fiction. It seemed the safest way to kill off her professors. Those professors are breathing easier now that Kate spends most of her time writing near the beach in Southern California where she lives with her perfect hero husband.

Kate is a member of Sisters in Crime, Mystery Writers of America, International Thriller Writers and Romance Writers of America. She is the proud recipient of the Golden Heart and Daphne du Maurier awards, and her first Bibliophile Mystery received a Best First Mystery nomination from RT Book Reviews. Kate loves to travel and read and drink good wine and watch other people cook.

Review of Deck the Hallways

Review (4.75 Stars):  Deck the Hallways is a cleverly written, charming mystery that will be an absolute delight to readers.  Shannon gets the opportunity of the lifetime to transform an old Victorian mansion into small apartments for low-income families.  This job will be a huge undertaking and all hands are on deck to make this dream come true during the holidays for these deserving families.  But soon trouble arises when Shannon’s father, Jack, gets involved in a heated argument with the president of the bank and becomes the prime suspect when the man turns up dead shortly afterwards.  Shannon must find another killer this holiday season before it is too late and she becomes the next victim on their naughty list.

This is one of my favorite mystery series and I can’t tell you how much I love Shannon and the gang.  She is such a sassy, intelligent and resourceful young heroine and you can definitely tell that she loves what she does, renovating homes.  I loved that this story was set during the holidays and this mystery was very intriguing from start to finish. This is number four in the Fixer-Upper mystery series and I hope that this series continues for many years to come.