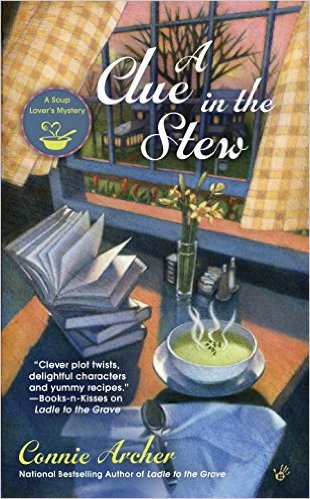 When Lucky Jamieson opens up By the Spoonful to host an event with a famous author, she’s not expecting a bunch of nuts to descend on her small-town soup shop. But the author’s exasperating entourage—from a prickly publicist to a snippy son and his tipsy wife—give fresh meaning to the phrase, too many cooks spoil the broth.

The evening is more than spoiled, however, when it ends with a homicide. When the manner of the murder—as well as another recent unsolved crime—echoes the author’s fiction, Police Chief Nate Edgerton realizes he has a copycat killer on his hands. And Lucky hopes that one of her regular customers who has mysteriously gone missing isn’t involved. Once again, the soup shop owner will need to stir up some clues to find her friend and catch a cunning killer—before things really take a tureen for the worse…

Connie Archer is the national bestselling author of A Spoonful of Murder and A Broth of Betrayal, the soup lover’s mystery series set in Vermont, from Berkley Prime Crime. The fifth book in the series, A Clue in the Stew, was released on April 5, 2016. Connie was born and raised in New England. She now lives on the other coast.

Review of A Clue in the Stew

Review (5 Stars):  I absolutely love this series!!!  In this story, Lucky hosts a book signing at By the Spoonful for famous mystery writer, Hilary Stone, to promote her new release, Murder Comes Calling.   Things don’t go as planned and the night is spoiled by the death of the guest of honor and Lucky finds herself involved in another murder investigation.  Lucky must find the clues to reveal the killer before the list of victims gets any longer.

A Clue in the Stew was a charming mystery whose characters keep me coming back for more.  Ms. Archer is a very talented mystery writer and her books are well-written, with complex plot twists and entertaining characters that you instantly connect with.  This book was a winner for me and I can’t wait to see all the wonderful things in the next book that were teased at the end of this story.

2 Responses to “Blog Tour & Review: A Clue in the Stew by Connie Archer”