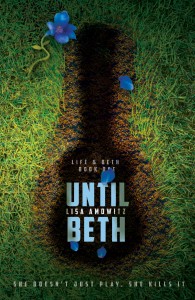 She doesn’t just play, she kills it.

Talented rock guitarist Beth Collins has been barely holding herself together for months, ever since her boyfriend and bandmate became the latest victim in a string of suspicious disappearances. When her brother is injured an accident and she sees something dark billowing around him as he hovers close to death, she’s convinced her sanity is collapsing for good.

Then she’s accepted by a boarding school for the musically gifted. All of her new friends are bursting with talent, but they’re also keeping secrets. Can she trust Vincent, who’s so sweet that his very touch makes her fears melt away? Or Xavier, who’s trying to tell her something but is hiding even more?

And will anyone be safe when her true Talent comes out?

Lisa Amowitz was born in Queens and raised in the wilds of Long Island, New York where she climbed trees, thought small creatures lived under rocks and studied ant hills. And drew. A lot. She is a professor of Graphic Design at her beloved Bronx Community College where she has been tormenting and cajoling students for nearly twenty years. She started writing eleven years ago because she wanted something to illustrate, but somehow, instead ended up writing YA. Probably because her mind is too dark and twisted for small children. Lisa is represented by Shannon Hassan of Marsal-Lyon Literary Agency. shannon@marsallyonliteraryagency.com

Review of Until Beth

Review (3.75 Stars):  This is a really interesting book for me because I had a hard time figuring out what was going on just like Beth did.  She experienced a lot of tragedy in her life and her music has always saved her from falling apart.  When she gets the opportunity to attend a school for talented musicians, she feels that her luck is finally changing but she is finding more secrets among her fellow students.  Now she must find the answers before it is too late and her own secrets may affect them all.

I liked Beth from the very beginning and I was sad that she was experiencing all this heartbreak at such a young age.  She was very talented, strong-willed and when I found out her secret talent, it explained everything.  Until Beth was an exciting thrill-ride of a novel and I’m hoping to find out news that there will be a sequel shortly.