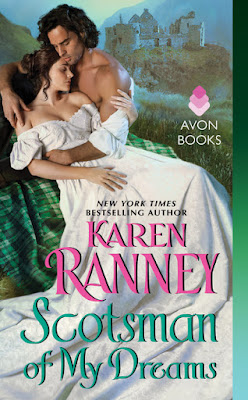 In USA Today and New York Times bestselling author Karen Ranney’s second novel in her breathtaking series, an unconventional woman and a former scoundrel embark on a daring mission of desire.

Once the ton’s most notorious rake, Dalton MacIain has returned from his expedition to America during the Civil War-wounded and a changed man. Instead of attending soirees, he now spends his time as a recluse. But Dalton’s peace is disturbed when Minerva Todd barges into his London townhouse, insisting he help search for her missing brother Neville. Though Dalton would love to spend more time with the bewitching beauty, he has no interest in finding Neville-for he blames him for his injury.
Minerva has never met a more infuriating man than the Earl of Rathsmere yet she is intrigued by the torrid
rumors she has heard about him…and the fierce attraction pulling her toward him.
Dalton does not count on Minerva’s persistence-or the desire she awakens in him, compelling him to discover her brother’s fate. But when danger surrounds them, Dalton fears he will lose the tantalizing, thoroughly unpredictable woman he has come to love.
BUY NOW
Amazon | B & N | iTunes | Kobo

Dalton MacIain, Earl of Rathsmere, stood in the doorway of his library, listening to Howington argue with a harridan. Were there peddlers in Tarkington Square now? He couldn’t hear their words, only the tone. Howington was maintaining his usual calm demeanor. The woman wasn’t, her voice growing louder, vying with the thunder growling overhead for dominance.
Turning back to the room, he dismissed the two of them. Howington would get rid of her, whoever she was.
He shouldn’t have sent his majordomo to Gledfield. If Samuels had remained here he would have opened the door, thereby sparing Howington the duty. Samuels would have also been a buffer between him and Howington. Pity that he hadn’t considered that earlier. Now Howington was always present, forever hovering in that obsequious way of his.
He moved unerringly to the window, reached up and closed the drapes against the storm. He remembered their shade, an emerald color he favored. Everything else about the room was as he recalled it: two wing chairs upholstered in a dark green fabric  sat before the fireplace with a small table between them; enough books in the shelves that he gave the appearance of being a well-read man. His onetime companions would have been genuinely shocked to know that he had read most of them, a good thing now.
Thunder rumbled, the windows shivering in response. The drumming of rain on the street outside sounded like muffled artillery.
He made his way to the sideboard on the opposite wall, a distance of exactly ten feet.
Removing the stopper from the cut glass decanter, he reached for a glass and tried to hold it steady. Another roar of thunder, this one sounding too much like cannon fire, made him put down the decanter and the glass, hearing the chink as they landed on the tray.
He stood with his fingers braced against the sideboard, staring straight ahead and willing his hands to stop their trembling. 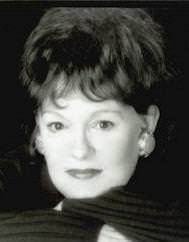 Karen Ranney began writing when she was five. Her first published work was The Maple Leaf, read over the school intercom when she was in the first grade. In addition to wanting to be a violinist (her parents had a special violin crafted for her when she was seven), she wanted to be a lawyer, a teacher, and, most of all, a writer.Though the violin was discarded early, she still admits to a fascination with the law, and she volunteers as a teacher whenever needed. Writing, however, has remained the overwhelming love of her life.
Website | Facebook | Twitter | GoodReads
Review of Scotsman of My Dreams

Review (3.75)  I love the humor in Ms. Ranney’s books and I loved the interaction between Dalton and Minerva.  Minerva was a very interesting character who was searching for her younger brother after he went missing when he went to America with Dalton and she was a strong, determined character that wasn’t going to stop until she got the answers that she was searching for. I enjoyed the romance between these two characters because it was a relationship that grew over time instead of just being “love at first sight” like other historical romances.  The mystery aspect story added to the storyline and I enjoyed every minute that I spent with these characters.  This is the second book in the Maclain series and I can’t wait to read what Ms. Ranney comes up with next.

3 Responses to “Blog Tour & Giveaway: Scotsman of My Dreams by Karen Ranney”