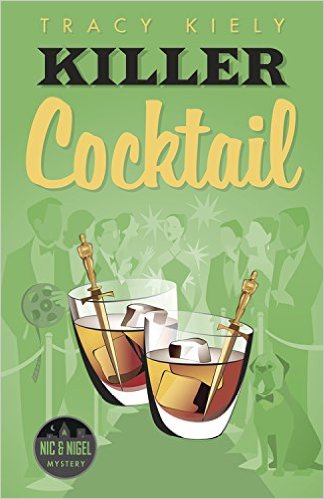 Walking the red carpet at the Academy Awards with a bow-tied Bullmastiff draws Nic and Nigel Martini plenty of attention from the press. But that’s nothing compared to the attention they receive at the A-list after party, when Hollywood royalty learn that Nic and Nigel have discovered behind the scenes footage from A Winter’s Night, an acclaimed film known for backstage love triangles and the tragic death of its original star, Melanie Summers.

Returning home after the party, Nic and Nigel find their house in shambles and their employee DeDee Evans beaten within an inch of her life. And when the weapon used to pummel DeDee implicates beloved actress Christina Franklin, Nic and Nigel drink and banter their way into a modern-day version of a golden-era crime caper. 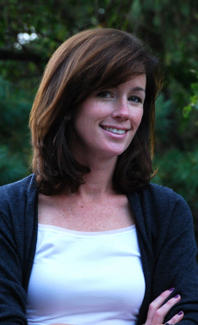 Tracy Kiely is a self-proclaimed Anglophile (a fact which distresses certain members of her Irish Catholic family). She grew up reading Jane Austen, Agatha Christie, and watching Hitchcock movies. She fell in love with Austen’s wit, Christie’s clever plots, and Hitchcock’s recurrent theme of “the average man caught in extraordinary circumstances.”

After spending years of trying to find a proper job that would enable her to use her skills garnered as an English major, she decided to write a book. It would, of course, have to be a mystery; it would have to be funny; and it would have to feature an average person caught up in extraordinary circumstances. She began to wonder how the characters in Pride and Prejudice might fit into a mystery. What, if after years of living with unbearably rude and condescending behavior, old Mrs. Jenkins up and strangled Lady Catherine? What if Charlotte snapped one day and poisoned Mr. Collins’ toast and jam? Skip ahead several years, and several different plot ideas, and you have her first mystery Murder at Longbourn.

While she does not claim to be Jane Austen, Agatha Christie, or Hitchcock (one big reason being that they’re all dead), she has tried to combine the elements of all three in her books.

Review (4.5 Stars):  I loved every minute of Killer Cocktail!  The characters were fun and entertaining with a well-written mystery that is sure to please. Nic and Nigel discover old footage from behind the scenes of A Winter’s Night, a beloved movie where the lead actress died during production.  As they start the restoration process, someone breaks into their home and steals the tapes, injuring their employee in the process.  It is up to Nic and Nigel to discover the truth behind the tapes and find the culprit before it is too late.

I loved Nic and Nigel’s adventures throughout Hollywood and the mystery kept me on the edge of my seat.  I love stories about behind the scenes of Hollywood movie-making and this was the perfect combination of humor and suspense.  Killer Cocktail is the second book in the Nic and Nigel mystery series and I’m already a big fan.  Looking forward to reading book three to see what this crime-fighting duo is up to next.