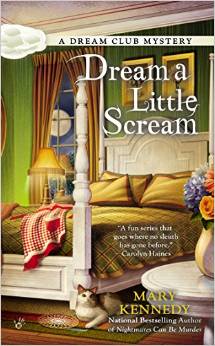 Behind her down-home folksy persona, celebrity chef Sonia Scott is a real Dixie diva who’s made plenty of enemies in her climb to the top of the culinary world. One of them is the newest member of the Dream Club, Etta Mae Beasley, who claims Sonia stole her family’s recipes and used them in her latest cookbook.

After Sonia’s suspicious death from anaphylactic shock at a book signing held at Taylor and Ali’s retro candy store, Etta’s revelation sows seeds of doubt in Taylor Blake’s mind. Now the Dream Club needs to put their heads together to determine if one of their own decided to give the chef her just desserts… 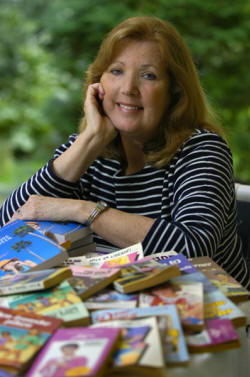 Mary Kennedy is a national best-selling author, and a clinical psychologist in private practice on the east coast. She has sold forty novels, all to major New York publishers, and has made the Waldenbooks, BookScan and Publishers Weekly best-seller lists. Her early novels included middle grade fiction and young adult fiction for Scholastic and Penguin.

Currently she’s writing an adult mystery series, The Talk Radio Mysteries, which is set in a fictional town in south Florida. The first title, DEAD AIR, was released January 2010, the second, REEL MURDER, appeared June 2010, the third, STAY TUNED FOR MURDER, January 2011. The Talk Radio Mysteries was pitched and sold as “Frasier Meets Murder She Wrote.” The heroine is Maggie Walsh, a psychologist who closes up her Manhattan practice and heads to sunny Florida to take a job as a radio talk show host. And, yes, she solves a murder in every book! As a former radio copywriter and a practicing psychologist, Mary is uniquely qualified to provide realistic background for her books – although she hasn’t personally solved any murders ;-). Mary’s favorite vacation destination is South Florida and she makes an annual winter pilgrimage to Fort Lauderdale.

Mary won an award from the National Endowment for the Arts for “artistic excellence in literary fiction.” A popular workshop presenter, she has spoken at over a hundred conferences, libraries and schools, all over the country. She also has written articles for PW, NPR, BookPage Gannett, RWR, and other industry publications. When not writing, speaking, or traveling to exotic locales, she lives with her husband and eight neurotic cats. The cats have resisted all her efforts to psychoanalyze them, but she remains optimistic.

Review of Dream A Little Scream

Review (4 Stars):  Ali and Taylor are such great characters and Dream A Little Scream is a great addition to this charming series.  In this story, celebrity chef Sonia Scott is in town to promote her new cookbook and has quite a history with several of the townspeople.  When she turns up dead, it is up to Taylor to find the killer before another victim is added to their list.

Such a delightful series.  The characters are well-developed and entertaining and they make this mystery so much fun. I loved the story in Dream A Little Scream because I’m a big fan of culinary mystery and this just seemed perfect for me.  This is the second book in the Dream Club mystery series and I can’t wait to see what is next for Taylor and Ali.

I’m excited to give away a copy of Dream A Little Scream. This giveaway is for US Residents only.  To be entered in the drawing by August 25th, please leave me a comment below: