Designs On Murder:
A Ghostly Fashionista Mystery
by Gayle Leeson 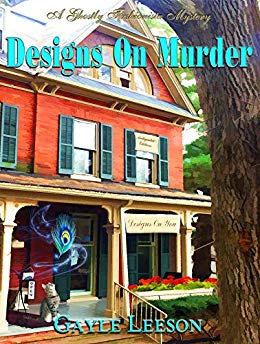 What if you discovered your lively new friend wasn’t really…alive?

Amanda Tucker is excited about opening her fashion design studio in Shops On Main, a charming old building in historic Abingdon, Virginia. She didn’t realize a ghost came with the property! But soon Maxine “Max” Englebright, a young woman who died in 1930, isn’t the only dead person at the retail complex. Mark Tinsley, a web designer with a know-it-all attitude who also rented space at Shops On Main, is shot in his office.

Amanda is afraid that one of her new “friends” and fellow small business owners is his killer, and Max is encouraging her to solve Mark’s murder a la Nancy Drew. Easy for Max to want to investigate–the ghostly fashionista can’t end up the killer’s next victim!

While researching Designs On Murder, I was surprised to learn about “the chemist’s war” during Prohibition. I found a Slate article dated February 19, 2019 titled The Chemist’s war which relates the “little-told story of how the United States government poisoned alcohol during Prohibition with deadly consequences.”

Oddly enough, I also learned that it was not illegal to consume alcohol during Prohibition—a fact I have Max point out in the book. However, it was illegal to manufacture it. Criminal organizations were stealing massive quantities of industrial alcohol used in paints, solvents, fuels, and medical supplies and redistilling it to drink. The U. S. Treasury Department estimated that by the mid-1920s, some 60 million gallons of industrial alcohol were stolen annually. This led to government officials ordered industrial alcohols manufactured in the United States to have the addition of lethal chemicals.

The most common additive was methyl alcohol, and by mid-1927, the new denaturing formulas included kerosene, brucine, gasoline, benzene, cadmium, iodine, zinc, mercury salts, nicotine, ether, formaldehyde, chloroform, camphor, carbolic acid, quinine, and acetone. Incidentally, methanol is a byproduct of the distilling process, which is why moonshine can be lethal even today.

Rachel, one of my brilliant beta readers, pointed out that Johnson City, Tennessee (about an hour’s drive from Abingdon) was called Little Chicago during the time of Prohibition because the city was reputed to be an occasional hideout for gangsters, including Al Capone. If you’re interested, you can read more about crime in Johnson City during Prohibition at https://bit.ly/2UV3GUq.

Gayle Leeson is a pseudonym for Gayle Trent. Gayle has also written as Amanda Lee and Gayle Trent. As Amanda Lee, she wrote the Embroidery Mystery series, and as Gayle Trent, she writes the Daphne Martin Cake Mystery series and the Myrtle Crumb Mystery series. Going forward, Gayle intends to keep her writing until the Gayle Leeson name. She has a series of women’s fiction novellas set in a shopping mall that has been converted to include micro-apartments (the Kinsey Falls series) and has just begun this new cozy series, the Ghostly Fashionista Mystery series. Another Down South Cafe novel is slated for release in August with book two in the Ghostly Fashionista series scheduled for October.

Review of Designs on Murder

Review (4.5 Stars):  I absolutely adored this mystery with its sassy dialogue, well-written storyline and delightful characters.  Amanda was a great heroine in this story and Max was by far my favorite because she was so much fun and eccentric.  This smart mystery will keep you on your toes and I’m dying to seeing what will happen next for Amanda and Max.

One Response to “Blog Tour & Giveaway: Designs on Murder by Gayle Leeson”