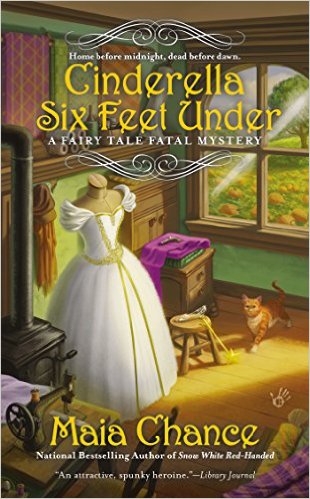 Variety hall actress Ophelia Flax’s plan to reunite her friend Prue with her estranged—and allegedly wealthy—mother, Henrietta, is met with a grim surprise. Not only is the marquise’s Paris mansion a mouse-infested ruin, but Henrietta has inexplicably vanished, leaving behind an evasive husband, two sinister stepsisters, and a bullet-riddled corpse in the pumpkin patch decked out in a ball gown and one glass slipper—a corpse that also happens to be a dead ringer for Prue.

Strangely, no one at 15 rue Garenne seems concerned about who plugged this luckless Cinderella or why, so the investigation is left to Ophelia and Prue. It takes them through the labyrinthine maze of the Paris Opera, down the trail of a legendary fairy tale relic, into the confidence of a wily prince charmless, and makes them vulnerable to the secrets of a mysterious couturière with designs of her own on Prue’s ever-twisting family history. 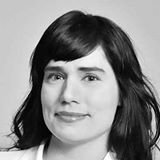 Maia Chance writes historical mystery novels that are rife with absurd predicaments and romantic adventure. She is the author of the Fairy Tale Fatal and The Discreet Retrieval Agency series.  Her first mystery, Snow White Red-Handed, was a national bestseller.

Maia is a candidate for the Ph.D. in English at the University of Washington. This means that the exploits of Fairy Tale Fatal’s heroine, variety hall actress Ophelia Flax, were dreamt up while Maia was purportedly researching 19th-century American literature and fairy tale criticism. The Discreet Retrieval Agency series was born of Maia’s fascination with vintage shoes, automobiles, and cocktails combined with an adoration of P. G. Wodehouse and chocolate.

Upcoming titles include Come Hell or Highball (St. Martin’s Press, 2015) and Cinderella Six Feet Under (Berkley Prime Crime, 2015). Maia lives in Seattle, where she shakes a killer martini, grows a mean radish, and bakes mocha bundts to die for.

Review of Cinderella Six Feet Under:

Review (3.5 Stars): Ophelia Flax and her friend, Prue have plans to reunite Prue with her long lost mother, Henrietta, when they stumble on a dead body that happens to look exactly like Prue.  Now, they have to deal with a missing mother, evil stepsisters and a murder investigation that no one is willing to get involved in.  Ophelia must help find the killer quickly or Prue may be the next intended victim.

Cinderella Six Feet Under was an entertaining mystery that kept me enthralled until the very end.  Historical mysteries can be hit or miss for me but I enjoyed spending time with Ophelia and Prue as they tried to solve the mystery of who killed Prue’s doppleganger and why she was found dressed like Cinderella outside the family home.  I thought this mystery was very well-written and was definitely a winner for me.  Looking forward to reading the third book in the series.

I’m excited to give away a copy of Cinderella Six Feet Under. This giveaway is for US Residents only.  To be entered in the drawing by September 19th, please leave me a comment below: