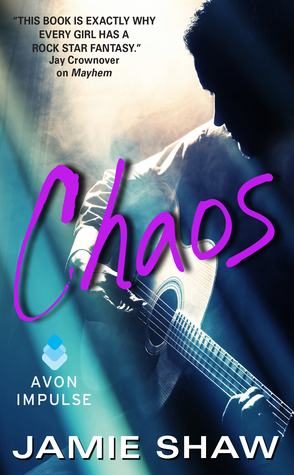 From the moment she saw Shawn Scarlett perform at a school talent show, Kit Larson has loved two things: the guitar, and the gorgeous, green-eyed boy who inspired her to play. But one careless night in high school shatters her hope of ever being more than a notch on his bedpost.

Six years, two bands, and one mostly-mended heart later, Kit’s about to make her rock star dreams a reality as the new guitarist for Shawn’s band, The Last Ones to Know. He may not remember their reckless night together, but Kit has never forgotten… and she’s determined to make him eat his heart out.

The release of their new album means a month cooped up on a tour bus, sleeping inches away from the ridiculously sexy musician she’s never quite gotten over. And as Kit gets to know the real Shawn—not Shawn Scarlett, the rock god, the player—their attraction becomes too hot to resist. But the past is paved with secrets, and when they finally surface, Kit could lose everything: the band, the music, her dreams… and Shawn.

When Adam’s hand lifts, I reluctantly stop playing.
“Do you write your own stuff?” he asks before my heart can sink too far. When I nod, he asks me to play something, and I play one of the new untitled songs I’ve been working on just because it’s the freshest on my fingers.
Again, I don’t get far into it before he stops me.
I wait for him to tell me I suck and order me to leave, but then the guys share a few words and all stand in unison, their chairs screeching against the floor as they get slid back. When Shawn, Adam, Joel, and Mike walk toward the stage, my heart beats hard, climbing inch by inch into my throat. I try to play it cool as Mike sits at the drums, as Joel and Shawn collect their guitars and hook them up, as Adam takes his place at the mic.
Adam names one of their songs and asks me if I know it, and I nod in a daze. My chin is still moving when Adam’s thumb goes up and Mike’s drumsticks tap together. Three taps, and then I’m swept up in a performance with The Last Ones to freaking Know.
We play bits and pieces of a few songs, and I’m feeling really, really good about my audition, when Adam gives me a big smile and says, “Okay. I think that’s good. Have we heard enough?”
He glances at Mike and Joel, who are both smiling equally wide and nodding, and then he looks at Shawn, who nods too, with no light in his eyes whatsoever. No smile, either—not a small one, not a forced one, just nothing. He doesn’t even try.
“Yeah,” Shawn says, turning that unfazed expression on me. “Thanks for coming. We’ll give you a call.”
I stare at him blankly, not giving myself permission to speak, or think, or feel—not with him standing in front of me, staring at me like I’m nothing. I politely thank the guys, and then I gather my things.
I leave knowing I’ll never hear from them again.
Because I know what it means when Shawn Scarlett says he’s going to give you a call.

Born and raised in South Central Pennsylvania, Jamie Shaw earned her M.S. in Professional Writing before realizing that the creative side of writing was her calling. An incurable night-owl, she spends late hours crafting novels with relatable heroines and swoon-worthy leading men. She’s a loyal drinker of white mochas, a fierce defender of emo music, and a passionate enthusiast of all things romance. She loves interacting with readers and always aims to add new names to their book boyfriend lists.

Review (4 Stars):  These two characters had amazing chemistry with one another and there is nothing sexier than a guitarist in a rock band.  Kit has been attracted to Shawn ever since middle school and one summer night several years later, she was finally able to get close to the man that she admired.  That one night changed everything for Kit but Shawn disappeared shortly afterwards and she thought she was never going to hear from him again.  That was until she auditions to replace their rhythm guitarist and is thrown into close quarters with Shawn on tour when she lands the gig.  Will these two be able to make up for lost time or is Kit destined to have her heart broken once again?

Chaos is the third book in the Mayhem series and even though I haven’t read the rest of the series, it was very easy to follow along with the storyline and the characters.  I loved Kit.  There is always something special about female guitarists and I loved her personality in this story.  She had big dreams and wasn’t going to let anyone stop her from achieving them.  I was mad at Shawn in the beginning of this book because of the way that he originally treated Kit and over the course of the book, he redeemed himself.  I just felt that these characters needed to communicate more with one another and this might have saved them a lot of trouble in the long run.

I’m looking forward to reading the rest of the series and familiarizing myself with the other members of the band.  Chaos was a sexy, fun Rock ‘n’ Roll romance that had me craving the spotlight right along with Kit.  Can’t wait to read Mike’s story next because I think I have a new favorite series on my hands.
a Rafflecopter giveaway