The men of the Twisted Steel custom hot rod and motorcycle shop are great with their hands…and they’re not afraid to get dirty. 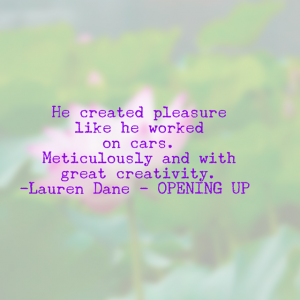 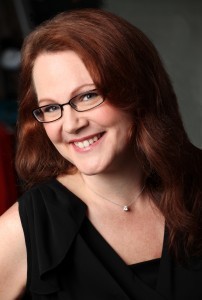 The story goes like this: While on pregnancy bed rest, Lauren Dane had plenty of down time so her husband took her comments about “giving that writing thing a serious go” to heart and brought home a secondhand laptop. She wrote her first book on it before it gave up the ghost. Even better, she sold that book and never looked back.

Today Lauren is a New York Times and USA Today bestselling author of over sixty novels and novellas across several genres.

My Review of Opening Up

Review (4.5 Stars): I loved PJ and Asa together as a couple. PJ was smart, talented, independent and you instantly fell in love with her just like Asa did.  She came from a rich family but was intent on making it on her own with her amazing skills in custom painting, which brought her closer to Asa.  Asa was the owner of Twisted Steel and even though there was an age difference between these two characters, they just fit so well together. Their sexual chemistry was off the charts and I loved how Asa took care of PJ in every single way.

PJ balanced Asa’s dark side and Asa was fiercely protective of the people that were in his inner circle.  She needed someone that would stand by her and be supportive of her through everything, especially when her family was so horrible to her.  I was angry at PJ’s father for the way he treated her and I wanted so desperately to reach into the book and give her a hug when her family was mean to her.  Thankfully, Asa was there to love and support her every step of the way.