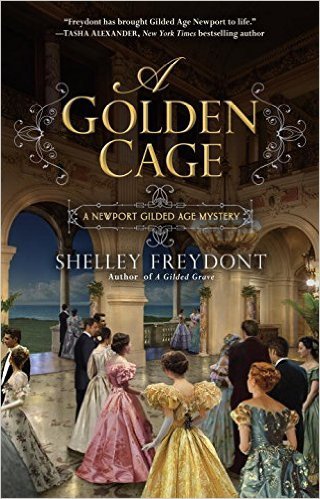 The author of A Gilded Grave returns to Newport, Rhode Island, at the close of the nineteenth century, where headstrong heiress Deanna Randolph must solve another murder among the social elite.

With her mother in Europe, Deanna is staying with the Ballard family, who agree to chaperone her through the summer season and guide her toward an advantageous marriage proposal—or so her mother hopes. Relishing her new freedom, Deanna is more interested in buying one of the fashionable new bathing costumes, joining a ladies’ bicycling club, and befriending an actress named Amabelle Deeks, all of which would scandalize her mother.

Far more scandalous is the discovery of a young man bludgeoned to death on the conservatory floor at Bonheur, the Ballards’ sumptuous “cottage.” Deanna recognizes him as an actor who performed at the birthday fete for a prominent judge the night before. But why was he at Bonheur? And where is Amabelle?

Concerned her new friend may be in danger—or worse—Deanna enlists the help of her intrepid maid, Elspeth, and her former beau, Joe Ballard, to find Amabelle before the villain of this drama demands an encore. 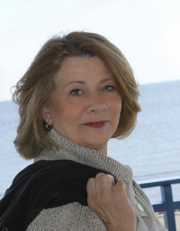 Shelley loves puzzles of all kinds and when not writing or reading mysteries, she’s most likely working on a jigsaw, Sudoku, or crossword.

As Shelley Noble, she’s the author of the women’s fiction novels, Beach Colors

as well as several novellas.

She lives at New Jersey Shore and loves to hear from readers.  www.shelleyfreydont.com www.facebook.com/ShelleyFreydont

Review of A Golden Cage

Review (4.5 Stars): A Golden Cage is a delightfully entertaining mystery that is filled with rich history and complex characters that you will instantly connect with.  Deanna is staying with her friend’s family for the summer and enjoying the festivities of the season including watching a theater troupe perform for a birthday party.  Deanna meets and befriends a young actress there, only to discover that this young woman is involved in the death of man just a few nights later. Now, she must help find a killer with the help of her friends before her actress friend is the next name on their victim list.

This is the second book in the Newport Gilded Age mystery series and I absolutely adore Deanna Randolph.  She is such a smart, independent young woman at a time where a woman was only looking to be married to a wealthy man.  This mystery was fast-paced, well-written and I enjoyed every moment that I got to spend with these characters.  A Golden Cage is a mesmerizing work of fiction and I’m looking forward to the next book in the series.

One Response to “Blog Tour & Spotlight: A Golden Cage by Shelley Freydont”