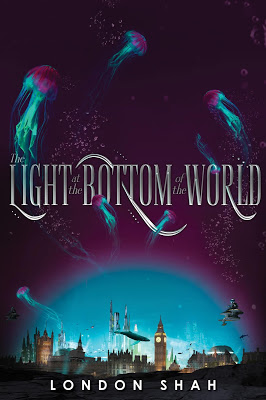 Hope had abandoned them to the wrath of all the waters.
At the end of the twenty-first century, the world has changed dramatically, but life continues one thousand feet below the ocean’s surface. In Great Britain, sea creatures swim among the ruins of Big Ben and the Tower of London, and citizens waver between fear and hope; fear of what lurks in the abyss, and hope that humanity will soon discover a way to reclaim the Earth.
Meanwhile, sixteen-year-old Leyla McQueen has her own problems to deal with. Her father’s been arrested, accused of taking advantage of victims of the Seasickness-a debilitating malaise that consumes people,often claiming their lives. But Leyla knows he’s innocent, and all she’s interested in is getting him back so that their lives can return to normal.
When she’s picked to race in the action-packed London Submersible Marathon, Leyla gets the chance to secure his freedom; the Prime Minister promises the champion whatever their heart desires. The race takes an unexpected turn, though, and presents her with an opportunity she never wanted: Leyla must venture outside of London for the first time in her life, to find and rescue her father herself.
Now, she’ll have to brave the unfathomable waters and defy a corrupt government determined to keep its secrets, all the while dealing with a secretive, hotheaded companion she never asked for in the first place. If she fails, or falls prey to her own fears, she risks capture-and her father might be lost forever.
Tour Schedule 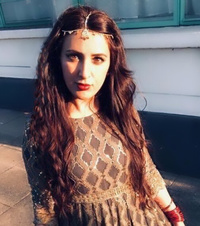 Author London Shah is a British-born Muslim of Pashtun ethnicity. She has lived in Britain’s capital city for most of her life via England’s beautiful North. When she’s not busy re-imagining the past, plotting an alternate present or dreaming up a surreal future, then she’s most likely drinking copious amounts of tea, eating all the sweets and cakes, strolling through Richmond Park or along the Thames, getting lost on an evening in the city’s older, darker alleyways—preferably just after it’s rained—listening to punk rock, or losing herself in a fab SFF book or film. If she could have only one super power, it would be to breathe underwater. THE LIGHT AT THE BOTTOM OF THE WORLD is her debut novel.

Review of The Light At The Bottom Of The World

Review (4 Stars):  This story was sooo good and I loved how Ms. Shah created this brand new underwater world. Leyla would do whatever it took to save her father and find out where he is being held after his mysterious disappearance.  This book had everything with adventure, mystery and just the perfect dash of romance.  Can’t wait to read the second book in the series.