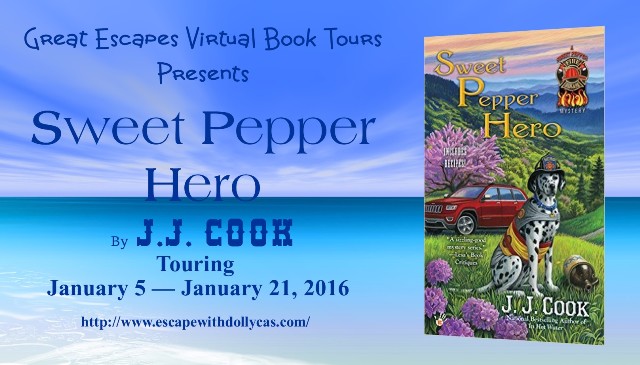 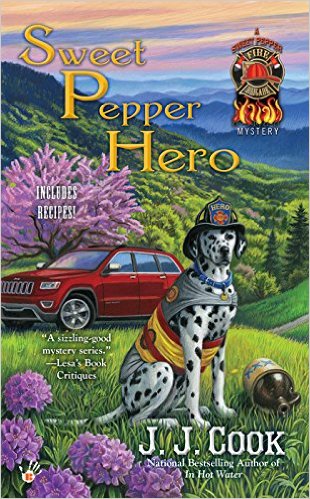 Fire chief Stella Griffin has been put in charge of judging the annual recipe contest, but Eric—her resident ghost and true culinary genius—has vanished. Before she can track down his latest haunt, she’s called in to investigate a local moonshine distillery that was set ablaze, making her realize there’s more than pies and cakes cooking in Sweet Pepper.

As rumors of a revived whiskey war ignite, Stella turns to the town’s elders to help her find answers. The past might have some clues as to what has sparked the present fires. But when following a lead lands her in buried rubble, Stella realizes she must extinguish this case fast or she might be going down in flames. 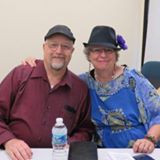 J. J. Cook is a pseudonym for a married couple who writes mysteries, mostly set in the South, with a touch of paranormal and romance.

Review (4.5 Stars): This is the fourth book in the wonderful Sweet Pepper Fire Brigade series and after the ending of the last book, I was dying to get my hands on this one.  Eric, the resident ghost, was still missing and Stella was desperately trying to find his location when she becomes involved in another investigation where someone is sabotaging local moonshine distilleries.  Stella must find the culprit before it is too late and this arsonist makes her their next victim.

This is such a charming and well-written series that has the perfect amount of humor and suspense.  Stella is one of the best heroines out there because she is smart, independent and one tough cookie that you don’t want to mess with.  Sweet Pepper Hero was a great mystery that kept me on the edge of my seat trying to decipher the clues right along with Stella.  I couldn’t wait to see what had happened to Eric and who was behind all the fires at the moonshine distilleries and this book doesn’t disappoint.  I can’t wait to read what happens next with these delightful characters.