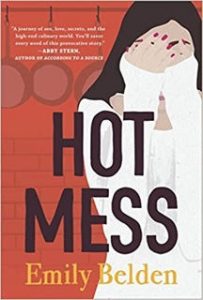 Twenty-something Allie Simon never imagined she’d fall for a recovering drug addict—but that was before she met Benji Zane, Chicago’s hottest up-and-coming chef, who’s known as much for his hard partying ways as for his unparalleled culinary skills. Six months into their relationship, the food and chemistry are out of this world, but the reality of living with a cooking wunderkind hasn’t exactly been all hearts and flowers. Still, Allie’s convinced that her love is the key to fixing this talented man’s broken soul—so when Benji is offered his dream job as chef de cuisine for a new restaurant opening on Randolph Street, Chicago’s foodie hot spot, Allie agrees to invest her life savings in his future. But less than a month after she goes all in, Allie learns a heartbreaking lesson: addicts lie. Benji cracks under the pressure, relapses and disappears, bagging out not only on the restaurant, but on her, too. Left with nothing but a massive withdrawal slip and a restaurant that absolutely must open in a matter of weeks, Allie finds herself thrust into a world of luxury and greed, cutthroat business and sensory delight. Lost in the mess of it all, she can either crumble completely or fight like hell for the life she wants and the love she deserves. 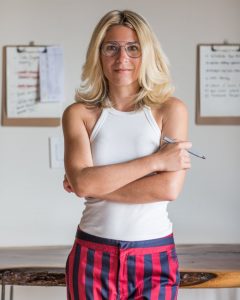 Emily Belden is an author for powerhouse publisher, Harlequin/HarperCollins. She is represented by famed literary agency, Browne & Miller, along with 44 Blue Productions in Burbank. The SoCal studio is adapting her memoir into a comedic series.

Review (4 Stars):  Hot Mess was an entertaining tale and I really liked how Allie navigated her way through the crazy restaurant world.  I wasn’t sure that I would like Allie because she seemed a little standoff-ish in the beginning but she grew on me after watching her fight to save the restaurant over the course of book. This story was well-written and interesting so I’m looking forward to seeing what Ms. Belden puts out next after reading Hot Mess.